Theology of the Laity – According to a Seminarian

Recently, I met with a visiting friend (who happens to be a canon lawyer) and we decided to sit in on Rome’s Theology on Tap, offered by some of the seminarians of the North American College to some of the study abroad programs that they work with for their “apostolates” (volunteer service giving them practice in some forms of ministry).

It is an interesting experience, to a professor of both U.S. undergrads and seminarians in Rome, because although neither the seminarians nor most of the undergrads present are in my classes, it still felt a little like I was listening to an oral presentation by one student that needed grading. I could not help myself.

The topic was “The Laity”. In fairness, my seat was in the back, so there were times it was hard to catch everything. But these are the points I heard:

My canonist friend and I come from different cultures of Catholicism, but both have an ecclesial vocation, as lay people, in ministry and service to the Church. And while we had different objections to some of the points, we were in accord that, unfortunately, not everything represented well the Church’s teaching. The Church itself, of course, is not always consistently clear on this topic, which occasionally adds to the confusion.

First, he’s right on his penultimate point about the mission of the laity, which is the mission fo the Church. The laity are the vanguard of the Church’s mission, the clergy and other ecclesial ministers are there for support and leadership, but it is the laity whose first role is to go out into the world and get the real work of the Church done.

The final point might have been a reference to canon 212, by which all the faithful have the right, and are even obligated, to make their needs and concerns known to the Church according to their expertise. Consider this an exercise thereof to avoid similar mistakes by others.

Now the problematic points.Taken with a grain of salt, as i said, there was occasional cross-noise, so if i missed any clarifying comments or explanations to the points, the fault is mine.

The Church itself does not make use of this “objective”/”subjective” distinction in terms of a person’s state. All are equal in baptism. All are equally called to holiness, as he pointed out. Where there might be some confusion is in distinguishing the ways we participate in the One Priesthood of Christ. All who are Initiated (Baptized, Confirmed, Eucharist-ed) have a share in Christ’s priesthood. This is the universal priesthood, the priesthood of all believers. As priests, we are still equal. Lumen Gentium 10 says that these two kinds of participation in Christ’s priesthood “differ from one another in essence and not only in degree.” This seems to lend credence to the idea that one is higher. Avery Dulles, however, repeatedly pointed out it was better understood as “differing from one another in essence and not in degree,” that is, that they are different kinds of participation, but one is not higher than the other. Plus, we have only to look at scripture to see Jesus’ idea of leaders clamoring for a “higher status” – and it is not well received. Those called to leadership are called as servants.

Which goes to the distinction between ministry and service. As I missed something, its entirely possible he hit something right on, but the follow up was insufficient. The two words, in a Christian context, are both translations of diakonia. All ministry is service. Fair enough to say that not all service is ministry, but the distinction is not about ordained and lay, but about the nature of the service. Rather like the distinction between skills and charisms, wherein the later are always for the building up of the Body of Christ. Possible confusion comes from an infamous interdicasterial instruction that attempted to limit the term “ministry” to the ordained back in 1997, wherein this dichotomy was presented – yet every pope since (John Paul II, Benedict XVI, and Francis) have referred to lay ministry, as have most bishops conferences and other documents of the curia.

Finally on vocations. Put simply, everyone has a vocation. There are hardly only two options for lay people, and in fact, the two mentioned were only one kind of vocation – relationship – which is also called a state of life. Everyone also has a vocation to ministry/mission and to spirituality, at least. Some of the faithful are called to marriage, consecrated life, celibacy or single life. Some of the faithful are called to serve the church’s mission in the world, some as ecclesial ministers. Some of the former take vows, some enter into a sacramental relationship, though not all. Some of the later are ordained, though not all. Not all celibates are priests, not all priests are celibate. Not all lay people are married, and not all married people are lay. When talking vocations, it is confusing to try and force the square peg of relationship into the round hole of ministry.

But, that is one of the services offered by seminary, correction to mistaken ideas about the people you are called to serve. 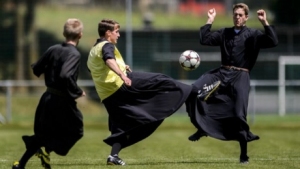