Since September, it seems nothing has been bigger news in the circles of ecclesiastical gossip and intrigue, especially for the aficionados of the Tridentine liturgy, than the rumored “demotion” of Raymond Cardinal Burke, a Wisconson native and former Archbishop of St. Louis, who has been serving as Prefect of the Apostolic Signatura since 2008.

Radical Traditionalists, already no fans of Pope Francis, immediately went into hyperbolic fits of indignation: Never has a cardinal been treated so badly! What disrespect! How ham-fisted! It’s a junta! You might as well decapitate him! Where is Pope Benedict? Or Pius X, better yet? This is all Kasper’s fault! Woe is us! The modernists are coming!

Though he confirmed the rumor himself in the midst of the Synod on the Family, the official appointment was only made on 8 November, when Burke was appointed as Cardinal Patron of the Sovereign Military Order of Malta – a crusader-era hospitaller order that continues its millennium-long tradition of service and chivalry from its headquarters on Rome’s Aventine hill.

But the truth is, if Pope Francis were really interested in ungraciously demoting Burke, he could remove him from the College of Cardinals altogether, send him into cloistered retirement permanently, or appoint him as bishop of some small diocese somewhere (I hear Spokane is open).

The fact is that nearly all the cardinals working in the Roman Curia as heads of dicasteries lose their office when the pope that appointed them dies or resigns. The new bishop of Rome has complete freedom to either confirm them in their appointments, reappoint them anew, give them a temporary appointment, or let them go altogether. All cardinals are basically at-will employees of the Pope – more so than any other office in the Church, the Sacred College is tied directly to the personal prerogative of the bishop of Rome.

Cardinal Burke was never confirmed in his office as prefect, but was simply left there on an interim basis – even for longer, at 18 months, than several others in the curia. This happens with every single new pope. All the time. 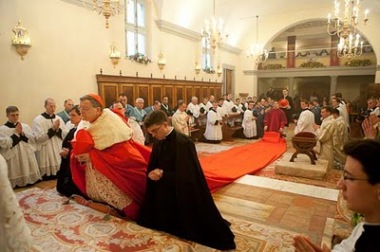 By comparison, Burke is being given a plum assignment. He gets a cushy residence, gets fêted and fed, gets to dress up in his beloved baroque wardrobe, and never has to worry about his livelihood. On top of that, he actually gets to work with an established and internationally respected humanitarian organization. I would not mind being “demoted” like this. Not at all. (Except for the garb, i suppose).

Cardinal Burke served for just over six years as prefect of the Apostolic Signatura – longer than any of his seven predecessors going back to the days of Paul VI.

It is true that he has become the poster-bishop for the Extraordinary Form of the Roman Rite – the Tridentine Mass. He is more widely known for his watered silk and lace ensembles than for his various canonical accomplishments. He is outspoken in his criticism of even the slightest suggestions at reform in the church, a voice for the status quo and the fortress-against-the-world approach to ecclesiology.

This is not the message the Church should be sending. Noble simplicity does not call for acting simply like nobility. The Church does not need princes in renaissance and baroque regalia, it needs shepherds and servants garbed like Christ the Deacon, ready to wash the feet of the disciples of God.

It seems somehow fitting to match Burke with the Sovereign Military Order of Malta. An affinity for flashy capes is perhaps not their primary charism, but it is a starting point that they share with their new patron. It can be done in context, not as an historical recreation or an exercise in liturgical nostalgia.

Does anybody think he would be better suited at Cor Unum or Christian Unity? Archpriest of Mary Major? Or perhaps as a diocesan ordinary back in the States somewhere? Personally, I wonder why there is not just a personal prelature for the devotees of the Extraordinary Form; make Burke the prelate. Or perhaps personal ordinariates might be more fitting; make him one of the ordinaries. If there is one bishop (in this case a cardinal) representing that movement in the church, it would be enough. If it is that ministry which gives him the most joy, and for which he gets the most support, would not that be just the place to put him?

By A.J. Boyd in Church Reform on November 8, 2014.
← Quinque annis fui Romae Theology of the Laity – According to a Seminarian →