Home » Church and World » When is Christmas?

Seems a strange question to ask in the middle of November, but I have already seen signs on social media that, back in the States at least, the encroachment of Christmas on other holidays is already in full swing. 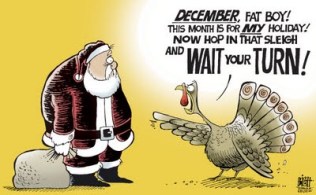 One of the great things I have loved about living in Italy is that they still know when Christmas is, and neither start celebrating/decorating/commercializing too early, nor do they quit before it is finished.

However, in the last few days, I have heard people playing Christmas music, I have seen stores start displaying gingerbread houses (!), and one colleague has already put up a Christmas tree.

Personally, I have only just gone shopping at Castroni to get pureed pumpkin so I can bake a pie, since I am somewhere between Hallowe’en and Thanksgiving (which is a big Italian holiday, you know, with turkey cacciatore, sweet potato parmesan, and cranberry cannoli.)

To be honest, I am not sure which end is worse – seeing signs of Christmas before Thanksgiving (or Veteran’s Day, or Hallowe’en) or seeing them disappear just as Christmas really gets started because people are tired of having heard Jingle Bells since August.

In Italy, the decorating begins, customarily, no earlier than around 6 December (St. Nicholas Day) or 8 December (the feast of the Immaculate Conception of Mary). The Christmas tree at St. Peter’s arrives around then, but is only lit on or about 17 December – which happily coincides both with the beginning of the intensification of Advent with the O Antiphons and with the ancient Roman festival of Saturnalia. In fact is only by that point in mid-December that Christmas season really feels to be upon us.

Who would think of stopping the Christmas music or tearing down the lights or throwing out the tree just as the holiday begins? Nobody takes anything down until after 6 January (feast of the Epiphany) at the earliest. At the Vatican, the Nativity scene (usually unveiled only on Christmas Eve) remains on display until 2 February (Candlemas), the feast of the Presentation of Our Lord as a child in the temple. (This is the source of the Nunc Dimittis, the Canticle of Simeon, who sings praise for being allowed to live long enough to see the messiah). A fitting end to the Christmas periphery.

There is a time for everything,
and a season for every activity under the heavens:

By A.J. Boyd in Church and World on November 13, 2014.
← Theology of the Laity – According to a Seminarian Married Catholic Priests Coming to a Parish Near You →