I am not a classicist, so any Fr. Reggie disciples out there, be merciful with my occasional Latin.

It seems more and more my posts begin with “sorry I have not written in so long…”, but then so do most of my emails.

A new semester has begun for U.S. study abroad students in Rome, and in the miracle attributable to Our Lady of Climate Change, while Calgary experienced the hottest summer on record in 75 years, Rome has been topping out at a pleasant 27°C [80°F] or below since I have been back. That’s practically Halloween weather!

My adjunct professorial career continues with two courses this fall: Catholicism Today, and the Theology of the Church in Rome. I will also be serving as the Academic Success and Spiritual Life/Campus Ministry Advisor for one university, where i now reside. No longer the graduate assistant at the John Paul II Center for Interreligious Dialogue, my academic focus should allow time for more writing. Mostly, i hope, on the dissertation, but also a bit on this blog!

Personally, summer included two seminars – one online on the ordination of women to the diaconate in the Church’s past, present and future; and the other in Greece on Orthodox Theology. I heard the clearest and most concise explanation of the filioque issue ever, and my faith in its ecumenical resolution is now certain. Then there were visits home to Seattle, to the Canadian Rockies and Calgary, and a wedding in the Colorado high Rockies above Denver. Hiking, camping, road trips, and fog so thick you would not be able to see a volcano if it were right in front of you. More on all of that soon. Pictures too.

Broadly, the Vatican Bank’s been getting cleaned up, the world is at war and in large parts oblivious to the fact, Christianity has been all-but extinguished in one of its ancient patriarchates, a Pan-Orthodox Council (inshallah) is promised, and there are some rather nervous prelates around Rome. June saw the third installment of the very successful Receptive Ecumenism conferences, and as people trickle back in from vacation around the Eternal City, all eyes are on the Synod for the Family – including a heavyweight book of ‘loyal dissent‘ announced this week.

I just had to say the blog will continue despite its lengthy pauses of late! 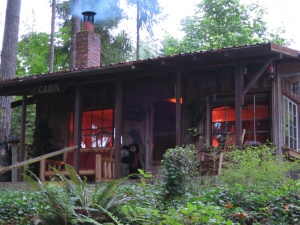 Yes, that is a fire in the fireplace in late July. It was a comfy place to call home – even if only for a day!

By A.J. Boyd in La vita Roma, Travel on September 2, 2014.
← On Priestly Celibacy and the Diaconate Cardinal Burke →