Married Catholic Priests Coming to a Parish Near You 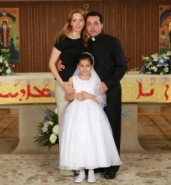 This, according to a document of the Pontifical Congregation for Oriental Churches, leaked today by Sandro Magister, the well-known Italian Vaticanist of La Repubblica.

The Congregation has issued a precept, “Pontificia Praecepta de clero Uxorato Orientali” – signed back in June and with papal approval– which allows the Eastern Churches to ordain married men wherever the Church is found, and to bring in already married priests to serve as needed, throughout the world. [6/106 Acta Apostolica Sedes, 496-99]

Most people know that Catholic priests of the Latin Church (the Roman Catholic Church) must be celibate. The exceptions being, since the 1980’s, former Lutheran or Anglican clergy who come into full communion, who may continue their presbyteral ministry while married.

Most Catholics are at least vaguely aware that this medieval discipline does not apply to most of the 22 Eastern Catholic Churches, who do in fact allow married men to become presbyters – it is only their bishops who are necessarily monastic, and therefore celibate. (Deacons are universally allowed to be either married or celibate).

Fewer people are aware of the embarrassing history that has restricted these churches from either ordaining married men “outside their traditional ritual territory” or, in some cases, even sending married priests to serve in these countries. Starting with migrations of Ruthenians in 1880 to the U.S., the Latin bishops (almost entirely Irish) of the States were so scandalized by the idea of married presbyters that they convinced the Congregation for the Propagation of the Faith to restrict married clergy from following their flocks to the new world. By 1929-30, these limitations were repeated and even expanded to other “Latin territories”.

This move so effectively undercut the sacramental ministry and infrastructure of the Eastern Catholic Churches in the States, that about 200,000 Catholics and their married clergy left communion with Rome, and effectively populated the Orthodox Church of America and other Orthodox jurisdictions.

What it really shows is a flawed ecclesiology and a lack of due respect to the autonomy of the diverse practices and patrimony of ancient and apostolic churches in communion with Rome. How, our Orthodox sister churches would ask, is it possible to take Rome seriously on proposals for reunion when she treats Eastern Catholic Churches so inappropriately – flexing her muscles and forcing them to follow her whims (or those of too-easily-scandalized Irish-American bishops). Rome has to show that it remembers that unity does not mean uniformity.

After Vatican II, it was thought this would change. After all, the Eastern Churches were encouraged to return to their proper patrimony and cleanse themselves of any inappropriate Latin influences. Pope Paul VI took the proposal under advisement… and there it remained, sadly, until our own time. The Congregation for Oriental Churches proposed some change in 2008, but with the objection of the Congregation for the Doctrine of the Faith to reversing the ban, exceptions were allowed only on a case-by-case basis. You started to see priests ordained back in the “traditional territory” being allowed to serve in the west. Under these “exceptional” situations, it was just this year that the U.S. saw its first married Maronite priest ordained there.

In 2010 the Synod on the Middle East again raised the issue.

Now, finally, we have the restoration of at least this one right to rites.

Catholic Patriarchs gather during the Synod on the Middle East

The Eastern Churches find themselves in three jurisdictional situations, basically, which have different practical consequences:

Still, one more reform on the long list of “no-brainers” that could have been done ages ago without actually challenging either doctrine or even its articulation. It is simply the correction of an historical mistake that ought never have happened in the first place – and certainly ought not to have taken 135 years. It is this kind of thing, no matter how small, that demonstrates real “concrete progress” that the ecumenically minded – both “at home and abroad” are looking for.

By A.J. Boyd in Church Reform, Eastern Churches, Theology and Ecumenism on November 15, 2014.
← When is Christmas? English Translation of Ruling on Married Eastern Catholic Priests →