Home » Church Reform » There should only be five Italian cardinals

There should only be five Italian cardinals

The internationalization of the College of Cardinals is neither new nor unique to Pope Francis, despite the grumbling in some circles about his penchant for going to the peripheries to elevate men to the porporati.

The College of Cardinals evolved out of the clergy of the local Church of Rome, as the Church of Rome and its bishop grew to take on more responsibilities beyond the level of a diocese or metropolitan province, in the early medieval period. There were cardinals from each of the major orders:

The cardinal-deacons had been seven originally, actual deacons, one each as dean of the seven regions of the city, responsible for the supervision of clergy and management of church personnel and resources. This number was raised to fourteen under Gregory the Great, and then four ‘palatine’ or curial deacons were added under Gregory II in the early eighth century, giving a total of eighteen cardinal-deacons. The cardinal-presbyters began with the presbyters of the early tituli, the twenty-five early ‘parishes’ of Rome. About fifty cardinals total, all Roman, by the eighth century. The seven cardinal-bishops were the diocesan bishops of the suffragan “suburbicarian” sees around Rome.

It was not even an institution unique to Rome, as at least in the ninth century, dioceses in general were encouraged to name cardinal clergy from the ranks. It is no surprise then that the cardinals were originally Italian, specifically Roman, and that this remained the norm for centuries.

As early as 975, however, we see the first non-Roman being named a cardinal of the Roman Church, when Archbishop Dietrich of Trier is named cardinal-presbyter of Santi Quattro Coronati on the Caelian hill. Within a couple of centuries, it becomes acceptable to appoint cardinals from outside of Rome without any requirement of residency, and the practice of titular churches for cardinals emerges clearly.

While the total number of cardinals evolved over the centuries, it rarely exceeded thirty after the thirteenth century and was formally limited to twenty in the fourteenth. The Council of Basel expanded it to two dozen, and it is about this time that the appointment of non-Italians becomes routine, if still limited. It is Leo X di Medici, famous for his excommunication of Luther and his lavish lifestyle, who dramatically expanded the Sacred College, to a total of sixty-five. Only ten of the forty-five cardinals created by Leo were non-Italian (mostly French), so the Italian majority grew and did not diminish for centuries. By the end of the tumultuous sixteenth century, the limit was fixed at seventy, where it remained until the twentieth century.

Despite the call of the Council of Trent (1545-63) to internationalize the college, the Italian majority remained solidly unaffected until the modern era. At the beginning of the twentieth century, 56% of the cardinals were Italian. It was Pius XII who was the first champion of internationalization. After World War II, Pius held the largest consistory since Leo X in 1517. Thirty-two new cardinals were created in 1946, only two of whom were Italians. By the time of the conclave to elect his successor, in 1958, Italians were only 36% of the college.

Pius XII’s successors from John XXIII to John Paul II continued the trend of internationalization. The Italian representation among the college dropped from 35-36% under Pius and John, to 23% under Paul VI, and 17% under John Paul II.

Benedict XVI reversed this trend. By the end of his pontificate in 2013, he had re-Italianized the college to the level it had been in 1978, undoing the internationalization efforts of his sainted predecessor from Poland.

Today, after Francis’ six consistories, we stand at an Italian presence of 18% (both among the electors only and the total). Perhaps on the next consistory will we will finally be back to the level of internationalization we last saw in 2005. He has so far been able to offer a corrective to Benedict’s Italianization, but has not yet made any advancement in the internationalization from that point. What he has achieved is a greater diversity of that internationalization, like Pius XII, reaching out to countries who had never seen a cardinal to call them to the college.

The College of Cardinals is not, of course, a directly representational body. But it is representative of the universal church, responsible for aiding the bishop of Rome in his responsibility as presider of a global communion of Christians. It should therefore reflect the reality it represents and is responsible for, if not slavishly, at least the demographic of the Church should be a model reflected in the Sacred College as a microcosm of the greater whole.

While North America and Asia are about par between global and cardinalatial distribution, Africa is slightly underrepresented and Oceana slightly overrepresented. The dramatic shift would have to be from Europe to South America. Especially from Italy to Brazil. With two and a half times as many Catholics as Italy, Brazil currently has four cardinal-electors to Italy’s twenty-five. It should have a dozen or more. Half the world’s Catholics live in the western hemisphere, yet less than a third of the cardinals come from there. It is time to balance the scales, in accord with the wishes of the Councils of Trent and Vatican II, and the actions of every pope (save one) since World War II. 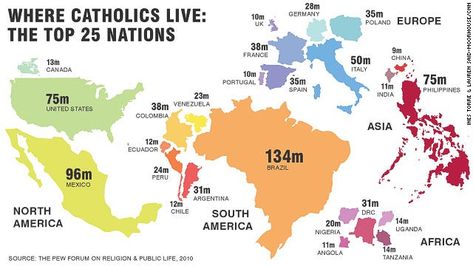