Home » Church and World » Catholic voting: The Myth of the Five Non-Negotiables

Catholic voting: The Myth of the Five Non-Negotiables 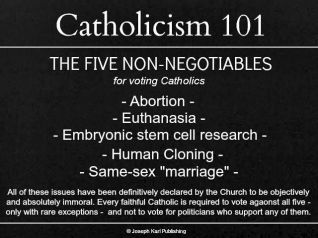 Cafeteria Catholicism at its worst

Oh, the lies they tell you! And no, i do not mean the politicians, unfortunately.

If you are a U.S. Catholic on social media, you may have noticed there is an election coming up next week.

Perhaps, as i did, you saw the following meme shared by a young priest, or received a flyer, as i did, from the local Knights of Columbus Council promoting the same “Five Non-Negotiables” for voting Catholics.

Simple, easy to remember, and easy to identify with one major party over another.

Problem is, they are a myth.

Like all myths, there is a lie built upon some truths: The Church is opposed to these five issues. The are some of the moral issues considered intrinsic evils, and some of these are Life issues, which take priority over others, however well integrated.

But to claim that these are THE five non-negotiables is entirely, and deliberately, misleading. There are several other issues that could be described the same way. This is classic “cafeteria Catholicism” at its most insidious: cherry-picking certain issues, ignoring or downplaying others, to get a partisan result rather than a faithfully Catholic one.

Now, those who know me well know that i have never felt comfortable in either of the U.S.’ major political parties precisely because i am a faithful, orthodox Catholic – and both are to a degree incompatible with Christian moral principles. As far back as i can remember being engaged or aware of national politics – the 1992 election, before i could even vote – i have had a difficult time choosing between candidates, as i did, say, between Barack Obama and John McCain. Often, i write someone in or pick a third party that better fits Catholic social and moral teaching.

This year is bad. There is no moral argument for Trump. None, whatsoever. He is an anthropomorphic personification of a “culture of death”. And Hillary is mediocre at best, with typical Democratic blindness on religion and critical life issues, but at least she’s qualified for the office. A low bar. In any case, i cannot vote for either. Persuasion to pick one or the other is not the point. What concerns me are the lies being told in the name of the Church, which is intolerable.

The myth: Where did they come from?

The first problem is the source of these rumored “five non-negotiables”. This is not an official teaching, nor an official summary of Church teaching.

(If you want to know the Church’s actual position, go to the U.S. Bishops’ Voting Guide. Read the Catechism of the Catholic Church and the Compendium of Social Doctrine.)

This particular marketing comes from a group that has been, at times, openly critical of the Catholic hierarchy, the folks behind CatholicAnswers.com. The meme i saw, pictured here, is from Joseph Karl Publishing, which is all about something called Catholic Restorationism, whatever that is. It has also been widely publicised by Priests for Life and the Culture for Life Foundation with their “Voter’s Guide for Serious Catholics”

Catherine Pakaluk researched the history of the myth a couple of years ago, and Mark Shea reminds us of times when they suddenly became negotiable as long as partisan politics were involved.

What does “Non-Negotiable” really mean?

A second concern is the use of the term “non-negotiable”. This is not a theological term, nor a category of Catholic social teaching, as such. You cannot find it, for example, in the USCCB official election guide, Forming Consciences for Faithful Citizenship, the Catechism of the Catholic Church, the Compendium of Social Doctrine, nor in any magisterial document that i can find.

According to the voter’s guides linked above, they start by correctly referring to “non-negotiable” principles and values, which is consistent with Church teaching and papal allocutions on the topic, but then abruptly abandon discussion of moral values and principles and go straight to listing issues – which is where things go wrong.

Moreover, there is a reason the Church avoids the term “non-negotiable” when it comes to issues. Even if we take the safest, most obvious of the issues, abortion, we find some problems with this terminology. Clearly, abortion is a grave moral evil which Catholics must work to end, that much clearly is “non-negotiable”.

However, we can negotiate on the method: is it better to reverse Roe v. Wade? Or to get legislature to pass a new law? Or to work to eliminate the motivations for abortions, like poverty, lack of health care access and education? To promote adoption and support single mothers? All of the above? Is it better to make abortion illegal, or irrelevant? To treat it as a crime, or as a trauma? Is this one issue enough to ignore all other evils a candidate might promote? (oops… that one is not negotiable, and the answer is a clear “no!” from the Church.)

So, apparently, “non-negotiable” is not the right term, especially when so erratically applied to Church teaching. That could explain why the Church itself avoids such oversimplification of issues, even the clear-cut moral biggies, like torture, care for the environment, intentional killing of any kind, etc…

So, Values and Principles then?

While the Church avoids use of “non-negotiable” for issues, there are non-negotiable principles, like the moral obligation to vote.

That’s right, abstaining, or “none of the above” is not an option.

However, and this is my own opinion, you should be well-informed enough not to buy into the GOP-Dem propaganda that you only have two options. Vote for the Libertarians, the Greens, the Socialist Workers, Socialism and Liberation, the Constitution party… or write in Bernie Sanders, or Evan McMullin, or, how about this, a party actually modeled on Catholic social teaching? the American Solidarity Party… anyone who actually fits your idea of a good candidate better than the big two.

The thing is, all moral principles are non-negotiable. You cannot sacrifice commitment to solidarity for the sake of subsidiarity, or the protection and promotion of human dignity for the protection and promotion of human life. The idea that the life issues form a “seamless garment” and are indivisible – meaning you cannot pit abortion against the death penalty or torture, for example – is itself a non-negotiable principle.

What of the issues?

The protection of human life and dignity at all ages and stages, from conception to natural death is one such principle. There are a dozen life issues outlined by the magisterium: In addition to the four life issues in the meme (abortion, euthanasia, cloning, and the destruction of embryos during research), other intrinsically evil life issues include genocide, torture, the targeting of noncombatants in war, terrorism, the promotion of war when peace is an option, the death penalty in societies such as ours, the development or use of weapons of mass destruction (nuclear, chemical, and biological).

But, according to popes Francis and Benedict, as well as the US Bishops, not only life issues have an intrinsic nature, and do not admit exception, compromise, or derogation – what you might call “non-negotiable”. Some of the examples they have used include the care of the environment – which has direct impact on human life on a massive scale; the freedom of choice in education; protection from slavery, prostitution, and human trafficking; development of an economy that is at the service of the human person and the common good, rather than greed and capital; feeding the hungry, both directly and through the development of better systems; eradication of poverty, including every level of assistance from personal charity to government welfare; a living wage for workers. While, as with every issue, there is room to negotiate the best methods, what is not negotiable is the principle behind the issues. ALL of these are as critical as “Catholic issues” as the five in the popular meme.

Seriously, when even a Legion of Christ priest is more ‘liberal’ in defining non-negotiables – by adding torture, war, religious liberty, and racism – you know your sources are flawed and more ‘conservative’ than orthodox.

Anybody selling you something different than the official teaching, or dumbing it down to meme-size, is a wolf in sheep’s clothing, whether Catholics4Choice or Catholics4Trump. For a priest to do so is entirely inappropriate, similarly, members of the Knights of Columbus are not allowed to promote such obviously partisan nonsense, in disobedience of the magisterium.

Can a Catholic vote for Hillary Clinton or Donald Trump?

Perhaps. But not without serious reservations in both cases, and only in light of the following: You cannot vote for them because of their support for any of the issues the Church opposes, from abortion and torture, to the death penalty and global climate change.

You can, however, vote for a candidate with some views in opposition to Catholic teaching if you find that there are other compelling reasons to do so. This is realistic – almost no candidate is going to have a 100% Catholic-compatible voting record. You have to promote good and avoid evil, and you cannot avoid some evil in either case here.

For example, Hillary’s views on abortion are obviously incompatible with Church teaching but her views on a number of other, similarly “non-negotiable” issues, are consistent with the Church. You could vote for her if those other issues outweigh the abortion issue, or even if they might conceivably do something to reduce the number of abortions more than simply making it illegal would. Or if the alternative is someone who would threaten nuclear war, promote the use of torture, or any other equally intrinsic evil.

Trump’s views on torture, the environment, the economy, etc. are also “non-negotiable” issues where he is out of line with the Church, and even his stand on abortion has ranged from “very, very pro-choice” to a lukewarm “personally opposed, but legally indifferent” and cannot be relied upon. As the most dishonest candidate in modern history, anything Trump says should be taken with a bucket of salt. But if you could find any moral issue where he is in agreement with the Church, and make an argument that it overrides the many issues he is in opposition, you could vote for him in spite of all of those.

The logic is the same in both cases.

Easier, by far, to find a safer alternative to either of them. That is what i have done, and in this cycle, seems the only reasonable option.

By A.J. Boyd in Church and World on October 30, 2016.
← Very Brief Observation on the Great and Holy Council Interview on “Thinking with the Church” →