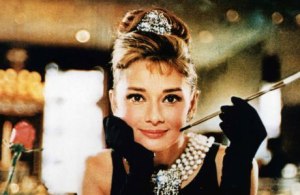 I saw for the first time recently, Breakfast at Tiffany’s. How does anyone not see this as a romance between a call girl and a gigolo? $50 “for the washroom”? That is nearly $400 in 2013 dollars!

I was not the only one with this reaction – and I was kind of shocked that something like this could be such a cult classic and regarded as such a great film of its time.  The poor girl who shared it with us, I think, was disappointed that we were not wrapped up in the romance of the film and the dreamy longing for material wealth as something to be admired. It was really one of the most morally bankrupt films I have seen in a long time, and considering I am a Game of Thrones fan (which never pretends to be anything other than brutal), that should say something!

It is awash in racism, materialism, objectification of the person, and touts a kind of celebrity lifestyle that makes Miley Cyrus look… well, ok, I cannot go that far. There is a certain elegance that Hepburn portrays that Cyrus lacks, but the latter is at least honest in the values and freedoms being celebrated: It is all naked truth, if you will. Whereas, at Tiffany’s it is a lie festooned in glitter and deceit. I do not know why my gut reaction was quite so strong, but I have never been so repulsed by a story since reading Ayn Rand. Maybe it is the reputation of the story, whether Tiffany’s or Fountainhead, and the realization that people actually want to emulate the protagonist therein that is so disturbing. Even as I write this I still cannot believe its popularity.

How was it received at the time of its release? When it came out, was it protested like the Last Temptation of Christ or Godfather III? Or did it get all the tweens atwitter looking for big sunglasses and a long cigarillo?