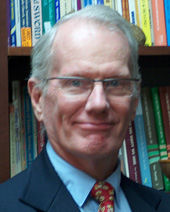 I was in Montenegro when I received word of Br. Jeff’s passing this summer (12 August). For more than a decade, Br. Jeff Gros has been one of my chief ecumenical mentors. There have been many who have helped me along the way, but few as significant an educator and supporter as Brother Jeff.   I have been reflecting on his life and his help to me in these years, and I keep finding it a daunting task to do justice to his memory and contributions.

There has never been any vocation for me but that of ecumenist. I barely remember wanting to do anything with my life other than be an ecumenist, even to the point of seeking it out as a university major (not an option, so I had to settle for Theology in general!). Whether the path to living it out was through the presbyterate, diaconate, lay ecclesial ministry, or academic theology always seemed to me to be a secondary question.

Br. Jeff was part of that generation that came of age just at the time of the Second Vatican Council. He completed his BA in the same year that Good Pope John called the council, and spent the years of the Council teaching in high schools and in his own graduate studies. In 1965 he published a master’s thesis on ministry and orders in the presbyterian church. In the very year the council ended! He wrote his doctorate at Fordham in the height of the energy and expectation about ecumenism, at a time when people seemed to think that reunion with Anglicans, Lutherans, and Orthodox, at least, would happen by the end of the decade.

Jeff was hired on as the first Catholic director of Faith and Order for the National Council of Churches during the 80’s, so he was on hand just as the WCC Faith and Orders most famous convergence statement, Baptism, Eucharist, and Ministry, was prepared, published, and received. In the most cutting-edge era of modern ecumenism, Jeff was at the forefront, and widely acknowledged as one of the most knowledgeable and approachable experts in a field populated by many of the best and brightest the Churches had to offer.

After a decade at Faith and Order, he was brought into the staff of the USCCB office for Ecumenism and Interreligious Dialogue, at that office’s height of effort and episcopal support. In the same year Pope Benedict was elected, the USCCB suffered a number of cutbacks and reorganizations, shrinking the office to half its previous staffing levels.

He was a member of the National Association of Evangelicals and of the Society for Pentecostal Studies, being elected president of the later on their 40th anniversary plenary. He knew the churches and communities from the inside out, and I daresay, sometimes better than many of their own leaders (Catholic Church included, of course).

I met Jeff in 2002, the year I finally got connected with national-level ecumenical networking (there was no ecumenical network for youth in the US then!), through my advisor at CUA, John Ford, CSC. First there was the CUIC Inauguration in Memphis, the National Workshop on Christian Unity in Cleveland, and Orientale Lumen in Washington, DC.  Jeff was one of the many “rock stars” of the ecumenical movement I encountered for the first time that year. I would have the privilege of his tutelage during the USCCB’s Institute for Ecumenical Leadership twice (basic and advanced) and at several conferences over the years, most commonly the NWCU.

Jeff was a walking encyclopedia of ecumenism. Having lived through the Catholic Church’s entire history of ecumenical commitment since the Council, as an academic and educator throughout, and having witnessed and documented most of it personally as staff at the NCC and USCCB for a quarter century, the number of people who paralleled his first-hand experience and knowledge of the movement can probably be counted on one hand.

I remember sitting at a table with Jeff when I admitted I had been confused when a speaker kept referencing Arminianism, and I had assumed they were talking about the Armenian Apostolic Church (and it was not making much sense). “How could you study the Synod of Dordt and not remember Arminius?” he chided with a smile as he launched into an enthralling history lesson on the intricacies of early 17th-century Dutch Reformed theology and its internecine conflicts. I did not have the heart to tell him that my survey of church history had not even covered the synod.

It was one of many teachable moments i had with Jeff, rather that he had with me, which encouraged me to further study. (Encouragement also sometimes took the form of a kick in the pants: “A.J., you know ecumenism, you know the material, just get your thesis written already!”) In fact, the last correspondence we had before he died was to encourage me to apply to a position as ecumenical officer in a large diocese that would allow me teaching opportunities as well. 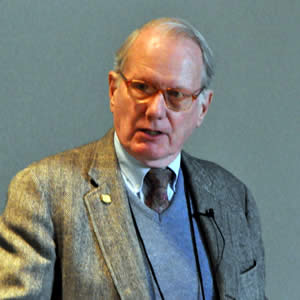 Br. Jeff at the NWCU

Talking to other young ecumenists (though I no longer qualify for the young part, I fear), everyone had an encounter with Jeff that pushed them along the path to unity.

But it was not just the external dialogue that Br. Jeff modeled. A lay brother, he knew the sting of clericalism long before lay ecclesial ministry had its rise and subsequent decline. I once found myself complaining to him about the disparity of opportunity for those of us without a Roman collar, when it hit me like a bolt – if Jeff had been ordained, he probably would have been made cardinal, a la Avery Dulles. What I found cause for grumbling, he handled with aplomb and renewed dedication.

He was tireless. He published more in the eleven years I have known him that I have hopes to achieve in a lifetime. More than twenty books bear his name as author, contributor, or editor, and some of them are massive tomes. Others are incredibly practical, pastoral, and handy for catechesis. He has over the 300 articles, and so many book reviews that they would probably fill an entire bookshelf in themselves. He consulted, taught, corresponded, and was present to just about everyone who has engaged in the search for Christian Unity in the Anglophone world in the last fifty years, I suspect.

Brother Jeff was an indefatigable proponent of the Gospel plea for unity in place of uniformity, for communion in place of conflict, for dialogue in place of division. He was and remains an inspiration to two generations of ecumenists, at least, and, I have no doubt, is in a place to intercede on our behalf as we recall and reclaim the final prayer of Christ. He will be missed in this here and now, but I am grateful every day to have counted him a friend and mentor.

By A.J. Boyd in Theology and Ecumenism on November 2, 2013.
← Year of the Deacon: A Proposal The Pacific Northwest Presence in Rome →