As if there was not enough in the Church reform circuit today, with the Roman pontiff’s second big interview and the first meeting of the Council of Cardinals responsible for reforming the apparati of universal governance, the Istituto per le Opere di Religione (Institute for the Works of Religion), better known as the Vatican Bank, issued its first-ever annual report in its 125 year history.

The groundwork was laid by Pope Benedict in 2010, whose most successful reform efforts, arguably, revolved around Vatican finances. The efforts were accelerated after Pope Francis was elected.

In 2012, the IOR commemorated 125 years of history since the creation of its predecessor, the “Commissione ad Pias Causas”, by Pope Leo XIII in 1887.

According to the president’s letter,

The Annual Report seeks to contribute to the transparency which the Catholic Church, our customers, our correspondent banks, our authorities and the public rightfully expect.

The IOR posted earnings of EUR 86.6 million, which allowed us to contribute EUR 54.7 million towards the budget of the Holy See, while transferring EUR 31.9 m to our general operating risk reserves.

And we are conservative: in 2012 we had a balance sheet total of EUR 5 billion in assets, with equity of EUR 769 million. On an operating level, we stand on very solid foundations.

The IOR has about 18,900 customers, half of which are religious orders. The dicasteries and nunciatures of the Holy See account for another 15%. Bishops and other clergy are about 13%, dioceses 9%, and the rest split between employees, educational institutes, and of course, the Holy See itself and the Vatican City-State.

The IOR launched its first website in July of this year: www.ior.va.

The full 100-page report is available for download or review here. 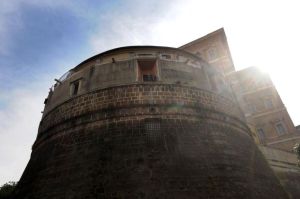 Tower of Nicholas V – HQ of the IOR

By A.J. Boyd in Church and World, Church Reform on October 1, 2013.
← Francis the Reformer: Some Reflections Church Reform Wishlist: Liturgy →