In the fall of 1997, I remember standing at the door to the Basilica of the Sacred Heart at Notre Dame, as I was congratulated several times on my appointment as auxiliary bishop of Fort Wayne-South Bend.

Of course, it was not me, but Daniel Jenky, CSC, rector of the basilica who had been so nominated. I was merely serving as vimpa for Bishop John D’Arcy, who was on hand to make the announcement. I was also jokingly referred to among the other servers and basilica staff as Fr. Jenky’s body double, so alike we looked with beard and glasses. Vested in alb and vimp veil, it is no surprise I was mistaken for the bishop-elect on more than one occasion that day.

We decided to dub his excellency as poster-bishop for our newly founded “Beards for Bishops” campaign. We – seminarians, servers, and theology students – felt it was high time for the lingering prejudice against hirsute hierarchs in the Latin church to come to an end.

When differences become polarized divisions, extreme positions are taken in reaction to “the other” that would not be considered in an objective, balanced mindset. Thus Reformed churches become iconoclastic and whitewashed, while Catholic churches spew baroque excess, each extreme fueling an even more extreme reaction. Similarly, as Eastern and Oriental churches maintained and promoted a manful and manly beardliness for its clergy. in the wake of division, the Latin west insisted on the clean shaven route. Perhaps in the wake of that move, clean-shavenness was purported to be too effeminate for the orders of the East, and so on.

In law, starting in the twelfth century, Latin clergy were discouraged and sometimes forbidden from growing their beards. The Council of Toulouse, in 1119, apparently threatened excommunication for those whos facial hair grew (or merely grew unruly, it is not clear), and Pope Alexander III (1159-81) ordered his archdeacon (think vicar general/chief of staff) to ensure that all Roman deacons and presbyters were clean shaven, by force if necessary. Gregory IX incorporated Alexander’s decree into canon law, and there it remained into the twentieth century. In 1866, the second plenary council of Baltimore explicitly outlawed beards for clergy in the U.S. The 1917 Code of Canon Law said merely to keep a simple hair style (CIC 136 §1), so the local law and cultural taboo remained. No legislation regarding facial hair remains in the 1983 code, Deo gratias.

It was not a consistent ban, despite the attitude and cultural assumptions during the Pian papacies of the 19th and 20th century. The popes from Clement VII (1523) to Inocent XII (d.1700) certainly had beards (as did, if the mosaics at San Paolo fuori le Mura are to be believed, most bishops of Rome from Peter through the first millennium  In fact, it was 800 years before we had the first beardless pontiff, in the person of Pope Valentine).

Nevertheless, the late pre-conciliar climate had ossified the  ban on barbarous appearance, and even after the apparent change with Vatican II, a bearded bishops was still barely to be found in the western Catholic church. From those humble beginnings in 1997, the Beards for Bishops campaign is now even more humble, and ready to tackle the next challenge: a bearded bishop of Rome.

One could add to that the hairier heads of the other Catholic Churches sui iuris, whether patriarch or major archbishop, given their office as heads of churches, and whether created cardinal or not, equivalent (at least) to the cardinal-bishops in dignity:

(Their Beatitudes, Patriarchs Bechara Boutrous al-Rahi of the Maronites and Raphael I Louis Sako of the Chaldeans are clean-shaven; rumors of Latinization have neither been confirmed, nor denied.)

Of these ten, then, who is papabile? The retired Coptic patriarch is already a patriarch emeritus and unlikely to succeed another. The Antiochene may be seen as too old. The Ukranian major archbishop, de facto patriarch of the second largest of the Catholic Churches (after the Roman), is seen as the most likely of the non-cardinals, but as more than a decade younger than the youngest cardinal, it is still a long shot. And, the idea of electing an eastern patriarch as bishop of Rome may still be too great a change for too great a number of cardinal-electors, though there is a sort of precedent (thirteen Greeks, four Syrians, and two from modern day Israel/Palestine, if you count Peter himself).

Though I might personally welcome such a move, let us assume it is unlikely. That leaves only two villous vescovi among the princes of the Roman Church. 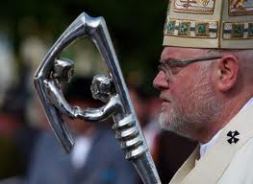 Archbishop Reinhard Marx of München serves on the pontifical council for peace and justice and the congregation for catholic education, and is president of the German bishops’ conference Committee for Social Issues. He was elected a year ago as President of the Commission of the Bishops’ Conferences in the European Union. He has published books on Catholic Social Teaching, and has been a bishop since 1996. When he was appointed, German news agency Deutsche-Press Agentur, described him as “left of center” in general, but “moderately conservative” on doctrinal issues. There have been seven or eight German popes, depending on whether you count Stephen IX, born in Lorraine (now France). 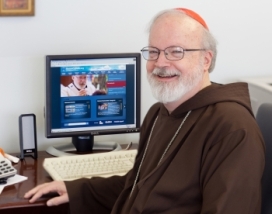 Archbishop Seán Patrick O’Malley of Boston is an Irish American Capuchin, with a record of cleaning up dioceses damaged by the sex abuse scandal (and the bigger scandal of their cover-ups by bishops). He was born in Lakewood, OH (where I lived for all of three months in the wake of the abuse scandal-induced hiring freeze on the diocese there in 2002). His doctorate is in Spanish and Portuguese literature and he was the first cardinal to start a personal blog and podcast, in 2006. He serves on the Congregations for Clergy and Consecrated Life, and on the Council for Family. There has never been a capuchin pope, an American pope, or indeed, a genuinely Western pope (that is, a pope from the western hemisphere!)

Could one of these two men be elected bishop of Rome later this week? If so, the Beards for Bishops Campaign will rejoice in the return of the razorless pontificate after centuries of suppression.  Join us in prayer, invoking the patron saints of facial hair, St. Brendan the Navigator and St. Wilgefortis the bearded virgin and martyr.

By A.J. Boyd in Church and World, La vita Roma on March 10, 2013.
← Catholic or catholic? Perspective from the Piazza: Bishop Francis of Rome →