Home » Church and World » Communion under one kind

Communion under one kind

The Lay Centre welcomed Monsignor Nicola Filipi, the secretary to Cardinal Agostino Vallini, the Vicar General of Rome. He is, if you will, the vicar general’s vicar general. Don Nicola joins us each year with an update about the life of the Roman Church – and no, I do not mean the Catholic Church as a whole there, but the properly called Church of Rome – the local metropolitan diocese.

I have mentioned elsewhere the great liturgical variety I see in Rome, certainly in respect the kinds of things that would have self-appointed liturgical police crying foul. But we experienced something perfectly legit, yet rather unusual, so it is worth commenting.

Much ado is made here about communion under both species – as in, they tend to forget that this is the norm.* In fact, most of Italy does not offer the cup to the assembly, or, if they do, they offer intinction. Either case is odd for someone coming from a local church where the normative value of offering and receiving under both kinds has always been strongly emphasized. At the lay centre we normally have both offered, but accommodate presider preference. 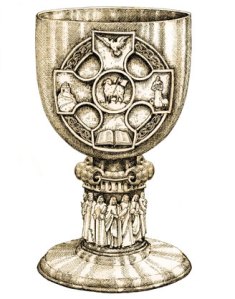 With a small community, we also try to prepare exact numbers of hosts, and while the Blessed Sacrament is reserved in the chapel, it is usually just a single host in a lunette or small monstrance withing the tabernacle. While this is more faithful to the norms of the Church, it is unusual in Italy, where parishes sometimes have so many reserved hosts that they will celebrate the Eucharist and then offer communion from the tabernacle – a clear liturgical no-no.

We had an unexpected number of guests that evening, and Don Nicola had decided to offer the cup by intinction. When it came to the last two in the communion procession, we were out of consecrated hosts. Turning to the tabernacle and finding only a single host in the lunette, he opted instead to offer the cup alone.

Communion under one kind only is sacramentally sufficient, albeit liturgically lacking, and foreseen only when there is no alternative or if there is some grave reason – like wheat allergy or alcoholism – to avoid the other species. Often in Italy it takes the form of the host only, and not the cup. It was nice to see the liturgical principle put into practice for exactly and only the reason it was intended, however.

What i find interesting is the choice to leave something in the tabernacle rather than offer it as communion.

*Sviluppo: I have been informed by an eminent italian canon lawyer, that in fact, the norm for communion in Italy, as promulgated by the national bishops’ conference, is the host alone. The legal norm is not the only norm, however. I have seen the situation best described by Paul Ford thus: “It is, in truth, acknowledged by many eminent authorities, that the Sacrament, as thus administered to the laity, loses a part of its significance, and may lose a part of its grace also, not of the grace of salvation, but of the grace of sanctification.” The sacramental norm, if you will, is both kinds, while the legal norm in this case is the host only.