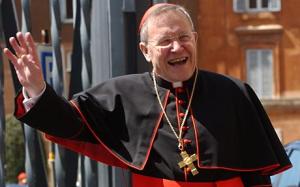 Cardinal Walter Kasper, during a lecture in a course offered at the Angelicum this semester, “Ecclesiological Themes in Ecumenical Dialogue: Catholicity, Apostolicity, Unity”

By A.J. Boyd in Theology and Ecumenism on February 1, 2012.
← “We Will All Be Changed By the Victory of Our Lord Jesus Christ” Ecumenical witness in the life of Camaldoli →