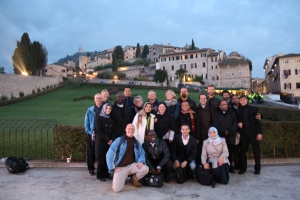 The Lay Centre at Foyer Unitas, in collaboration with the new Pope John Paul II Center for Interreligious Dialogue, planned a day trip to Assisi on 27 October 2011 to join Pope Benedict XVI and world religious leaders – and a few secular agnostics – in a day of pilgrimage toward peace.

Our group included seven from the Lay Centre, six Russell Berrie Fellows and alumni, and one who could count for both. Additionally, we were joined by Rev. Tom Ryan, CP, of the Paulist Office for Ecumenical and Interreligious Affairs; Anna Maria Kloss, wife of the Austrian Ambassador to the Holy See; and seven other pontifical university students, including two from the Gregoriana’s late Interdisciplinary Center for the study of Religion and Culture.

Our day began at 0500, enough time to get up and ready for an 0600 departure by tourbus, for the 3 hour drive to Assisi. At a coffee break on the way, we ran into the Turkish Ambassador to the Holy See. After arrival in Assisi we met up with our local guide and Lay Centre alumna, Lori King; Dr. Marian Diaz and staff of the U.S. Embassy to the Holy See.

The schedule of the day was relatively light. At 1030 the morning session at the Basilica of Santa Maria degli Angeli, in the valley below Assisi proper, lasted for a little under two hours. We then made our way up the hill to a restaurant near the Basilica of Santa Chiara (St. Clare) for lunch. After lunch a leisurely stroll took us to the other end of town, to join a World Youth Day in miniature going on in the lower piazza before the delegates arrived. The closing event started at 1630, and was over in time for us to get a quick pizza and be on the road to Rome by 2000.

Assisi was, if anything, quieter than many of my visits. Expecting large crowds for the event, most who did not have tickets stayed away, so in fact there was just a right amount – those with tickets admitted into the venues, and then only locals from Assisi and nearby towns lining the roadways or in the piazza outside the church. It was a welcome change from the unruly hordes that accompany papal events in Rome. Inside the basilica in the morning, we were seated barely 15 meters from the platform, though at an obscure angle. In the afternoon, the lowere piazza was filled, but it is not very large, and we were seated at just the place where the pope, patriarch, and archbishop disembarked their shuttle.

At one point, just before the delegates arrived for the afternoon program, one of our company had gone looking for water. We wanted to find him before it was too late to re-enter the piazza, but were barred from exiting by security as the delegates who were coming on foot were about to arrive. As we watched the nearly 300 religious delegates enter the piazza, wondering where Muhammad had gone, there he comes in the middle of the delegates procession, engaged in deep conversation with a professor from Sarajevo! It looked so natural, that security did not even think to stop him. It was classic, and again, left me wishing I had had a working camera with me!

In the end, the trip came together wonderfully, especially in that most of it was put together in only a week. It is a once in a decade event, made well worth it with the companionship of friends and colleagues in dialogue.

Muhamed and I engaged in some serious dialogue and sightseeing