Syro-Malankara Catholic bishops at the Angelicum

The bishops of the Syro-Malankara Catholic Church were in Rome this week for their ad limina visit “to the threshold” of the shrines of Peter and Paul, and to meet with their successor, Benedict XVI. There are a total of 13 of them, including the Major Archbishop-Catholicos, symbolically representative of Christ and the Twelve. (Also symbolizing Christ and the Twelve are the distinctive headcovering with thirteen stitched crosses, one large and twelve small.)

The Syro-Malankara Catholic Church has about 500,000 members, predominately in Kerala state, India. It follows the west-Syrian Rite and the liturgy of St. James of Jerusalem, and forms part of the Thomas Christians who trace their initial evangelization to the Apostle Thomas in about the year 52 AD. From at least the 8th century, the Metropolitan of the autonomous Thomas Christian Church was a hierarch in the Assyrian Church of the East, their closest ecclesiastical neighbors. The Thomas Christians held that communion was maintained, if communication lost, with the Catholic/Orthodox world until the arrival of Tridentine-era Portuguese missionaries at the end of the 15th century, who began a program of Latinization. Resistance to the imposition of western culture and ecclesiology culminated in 1653, the symbolic date for the breaking of communion and the eventual breaking of the once-unified Christian Church in India into its current situation, divided among those in communion with the Assyrian Church of the East, the Syrian Orthodox Church, Malankara Orthodox Syrian Church, the Malankara Mar Thoma Syrian Church (Anglican), the Syro-Malabar Catholic Church and the Syro-Malankara Catholic Church. The latter traces its origin to the corporate reunion of some Malankara Orthodox Syrian bishops and faithful starting in 1930.

The bishops met with Pope Benedict XVI this morning, and this afternoon were gathered at the Angelicum for a lecture offered by one of their number, Bishop Thomas Mar Anthonios, entitled, “New Evangelization: The Mission and Role of the Syro-Malankara Catholic Church”. The text is basically a synopsis of the lineamenta prepared for the first-ever Major Archiepiscopal Assembly scheduled for later this year. Thiers will be the first episcopal conference or church sui iuris to address the theme of the New Evangelization in plenary.

Before the beginning of the lecture, His Beatitude Major Archbishop Moran Mor Baselios Cleemis greeted the assembled students and guests, and made a special point to recognize his dissertation director, Fr. Fred Bliss, SM, from his days as an Angelicum student. As I sat surrounded almost entirely by Indian Catholics, the chanted prayer that began the seminar was one of the more moving spiritual moments I’ve experienced in recent weeks (I am not even sure if it was Hindi or one of the other languages, such as Tamil or Malayalam, I should ask).

Questions and challenges to be addressed in the new evangelization noted by Bishop Thomas included the relationship of evangelization and interreligious dialogue, individualism and secular culture (referred to as a “darkness”), the success of genuine inculturation, the necessity of Christian unity for effective evangelization, and the obstacles to freedom placed before the church both by the Indian state and the Roman curia (an issue which we were assured Pope Benedict had promised this morning to take under serious consideration). Pastoral lethargy was also noted as a challenge, “Communities should be shaken from their present slumber of maintenance to a renewed consciousness of mission.” 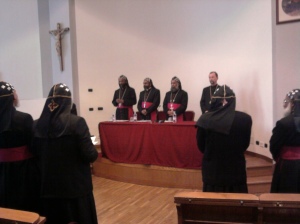