Home » Theology and Ecumenism » International Joint Commission for Theological Dialogue between the Catholic Church and the Oriental Orthodox Churches:

International Joint Commission for Theological Dialogue between the Catholic Church and the Oriental Orthodox Churches:

A few weeks ago I mentioned running into Fr. Ron Roberson on the streets of Rome as he was heading into this meeting. This is a repost of the report from Oriental Orthodox Church News and Events  posted by Ibrahim Yuhanon, S O C E ( Editor ) at 2/02/2011 07:49:00 PM 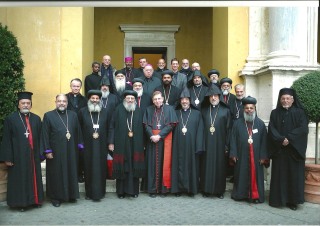 The eighth meeting of the International Joint Commission for Theological Dialogue between the Catholic Church and the Oriental Orthodox Churches took place in Rome from January 25 to 28, 2011. The meeting was hosted by His Eminence Cardinal Kurt Koch, the new President of the Pontifical Council for Promoting Christian Unity. It was chaired jointly by Cardinal Koch and by His Eminence Metropolitan Bishoy of Damiette, General Secretary of the Holy Synod of the Coptic Orthodox Church.

The two delegations met separately on January 25, and held plenary sessions each day from January 26 to January 28. Each day of the plenary sessions began with a common celebration of Morning Prayer. In his remarks at the beginning of the first session, Cardinal Koch welcomed the group to Rome, and said that “I have had an enduring ecumenical interest in the Oriental Orthodox Churches, and in your history, your life of faith, your liturgy and theology. I have always felt very at home in your presence. Despite our longstanding separation, we share a solid basis of faith and ecclesial order.” With great sadness the Cardinal also informed the group of the death of one of the Ethiopian Orthodox representatives, Father Megabe Biluy Seife Selassie. He has been replaced by Archdeacon Daniel Seife Michael, an instructor at Holy Trinity Theological University College in Addis Ababa. The cardinal also offered congratulations to Father John Matthews who, since the last meeting, was ordained a bishop and given the name Metropolitan Dr. Youhanan Mar Demetrios, Assistant Metropolitan of Delhi, and to His Eminence Nareg Alemezian who has been elevated to the rank of Archbishop. Metropolitan Bishoy took the occasion to congratulate Cardinal Koch on his appointment as President of the Pontifical Council, and to express his gratitude to Cardinal Walter Kasper for his co-chairmanship of the commission until his retirement last year. He also stressed that the official name of his family of churches should always be “Oriental Orthodox Churches.”

In these various studies, the members of the commission focused more precisely on the concrete expressions of communion and communication among the churches before the separation. Indeed, communion was expressed primarily through various forms of communication. It was noted that in the pre-Constantinian period, there was an intense communication among the churches, especially in times of crisis. There was a common sense of responsibility towards the other churches that was found most clearly in the exchange of letters and synodal decisions. These provided a means of conveying encouragement and challenge to one another, as well as theological clarifications. This exchange was mutual among the various churches. It exemplified a remarkable degree of communion among local communities in a process that lacked central direction after 250 years of expansion throughout the Roman Empire and beyond, including Armenia, Persia, Ethiopia and India. The universal phenomenon of Christian asceticism, present from the earliest times, found expression in the monastic movements, emerging from the late third century in all parts of the Christian world. There was a fruitful exchange of monastic spiritual writings emanating from the Christian Orient, even across doctrinal divisions.

In the evening of January 25, the members attended a Vespers service in the Basilica of Saint Paul’s Outside the Walls presided over by His Holiness Pope Benedict XVI for the conclusion of the Week of Prayer for Christian Unity. In his homily the Holy Father made reference to the presence of the members of the dialogue, and said, “We entrust the success of your meeting to the Lord, that it may be another step forward towards our longed-for unity”. On Thursday evening January 27, Cardinal Koch hosted a dinner for the dialogue members and staff of the Pontifical Council for Promoting Christian Unity at the Domus Sanctae Marthae in the Vatican.

Pope Benedict XVI received the members of the commission in private audience on Friday morning January 28. Cardinal Koch and Metropolitan Bishoy thanked the Pope for receiving the commission, and Metropolitan Bishoy presented a Coptic icon of Saint Mary the Mother of God to him on behalf of the members of the commission. The Pope then greeted the members, saying “It is with great joy that I welcome you, the members of the Joint International Commission for Theological Dialogue between the Catholic Church and the Oriental Orthodox Churches. Through you I gladly extend fraternal greetings to my venerable Brothers, the Heads of the Oriental Orthodox Churches. I am grateful for the work of the Commission which began in January 2003 as a shared initiative of the ecclesial authorities of the family of the Oriental Orthodox Churches and the Pontifical Council for Promoting Christian Unity. As you know, the first phase of the dialogue, from 2003 to 2009, resulted in the common text entitled Nature, Constitution and Mission of the Church. The document outlined aspects of fundamental ecclesiological principles that we share and identified issues requiring deeper reflection in successive phases of the dialogue. We can only be grateful that after almost fifteen hundred years of separation we still find agreement about the sacramental nature of the Church, about apostolic succession in priestly service and about the impelling need to bear witness to the Gospel of our Lord and Saviour Jesus Christ in the world. In the second phase the Commission has reflected from an historical perspective on the ways in which the Churches expressed their communion down the ages. During the meeting this week you are deepening your study of the communion and communication that existed between the Churches until the mid-fifth century of Christian history, as well as the role played by monasticism in the life of the early Church. We must be confident that your theological reflection will lead our Churches not only to understand each other more deeply, but resolutely to continue our journey decisively towards the full communion to which we are called by the will of Christ. For this intention we have lifted up our common prayer during the Week of Prayer for Christian Unity which has just ended. Many of you come from regions where Christian individuals and communities face trials and difficulties that are a cause of deep concern for us all. All Christians need to work together in mutual acceptance and trust in order to serve the cause of peace and justice. May the intercession and example of the many martyrs and saints, who have given courageous witness to Christ in all our Churches, sustain and strengthen you and your Christian communities. With sentiments of fraternal affection I invoke upon all of you the grace and peace of our Lord Jesus Christ.”

The ninth meeting of the International Joint Commission will take place in Addis Ababa, Ethiopia, at the invitation of His Holiness Abune Paulos I, Patriarch of the Ethiopian Tewahido Orthodox Church. The members will plan to arrive on Monday January 16, 2012, and depart on Monday January 23. The two delegations will meet separately on Tuesday January 17, and in plenary session on Wednesday, Thursday and Saturday, January 18, 19, and 21. They will participate in the celebration of Epiphany (Timkat) on January 20, and in Sunday liturgies on January 22.

The members concluded with joyful thanks to God, the Father Son and Holy Spirit, for what has been accomplished at this meeting.

The members of the Commission are:

Representatives of the Oriental Orthodox Churches
(in alphabetical order)

Representatives of the Catholic Church

Most Reverend Jules Mikhael Al-Jamil, Procurator of the Syrian Catholic Patriarchate to the Holy See and Apostolic Visitator in Europe, Rome;

Most Reverend Woldetensae Ghebreghiorghis, Apostolic Vicar of Harar, Ethiopia, President of the Ecumenical Commission of the Catholic Church in Ethiopia and Eritrea;

By A.J. Boyd in Theology and Ecumenism on February 20, 2011.
← Spring Studies Guest response to ‘Liberal’ and ‘Conservative’ in the Church →