Home » La vita Roma » Highlights of the Week of Prayer

Highlights of the Week of Prayer

A few highlights of the week here in Rome I thought I would share. Clearly, there was too much going on for me to even make it to most of the services and events, and even those I did get to would take too long to recount in full. 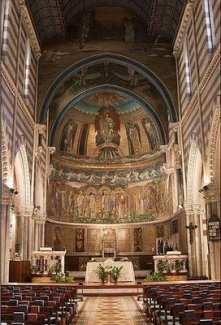 St. Paul Within the Walls, Rome

The pope called ecumenism a moral imperative. That does not leave much wiggle room for the doubtful, dissenting, or disinterested. Definitely a highlight, though already mentioned here.

One of the most beautiful moments was a concert by four Roman choirs at St. Paul Within the Wall, the Episcopal Church of Rome (That is, Anglican Communion, American branch). After an ecumenical evensong that was well-attended, these four choirs provided us with a live, surround-sound rendition of Thomas Tallis’ Spem in Alium. This is a ten minute, 40-part motet from 1570, an English response to the Italian mastery of Renaissance music. Given the timing, I suppose a little ecclesiastical/nationalistic competitiveness was not surprising. In any case, what Tallis produced is moving, and though listening to it on YouTube does not do justice to the experience, the parish has kindly provided a recording of the event here.

On Sunday, I celebrated the Eucharist with the Caravita Community, which I have mentioned before, as they are one of the Anglophone locales for events ecumenical. In addition to three of the Gregorian’s Muslim students there for part of their research into Christian worship (having already been to a  mass in Italian), there were some Anglican priests present, including a visiting professor from Virginia Theological Seminary, who was the guest homilist (and whose homily he brought to the ambo on his iPad). It was a good homily, but the most striking part of the liturgy came during the communion rite. As the Anglican priests, including the Archbishop of Canterbury’s Representative to the Holy See, Canon David Richardson, came to the presider to receive communion, they inclined their heads for a blessing. After blessing each, however, the minister inclined his own head and asked for a blessing from them. A fitting sign and ecumenical gesture – we are, painfully, still divided, but equally in need of each others’ prayer and benediction, especially in the sacramental moment that lays bare the imperfect state of our communion.

I should also note that here, as everywhere else during the week, including the papal liturgy, prayers during the general intercessions were offered for the pope, the ecumenical patriarch, and the archbishop of Canterbury, something which has been a decades-old (but often ignored) recommendation of the Holy See to churches around the world – and something which ought to be practiced more often! 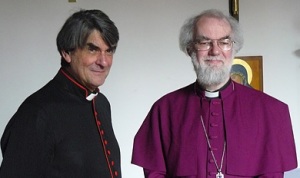 Canon David Richardson, Archbishop of Canterbury's Representative to the Holy See and Director of the Anglican Centre in Rome

A couple of days later, I was at the Anglican Centre, located within the Palazzo Doria Pamphilj off the Piazza Collegio Romano. Every Tuesday they offer mass and lunch for residents and visitors, Anglicans and Catholics alike. The small chapel accommodated the 30-35 people present, but snugly. Canon David was presider, and delivered what I think is the best homily of the week. Here, the intimacy, the noble simplicity of the rite, the familiarity and theology of the liturgy all coalesced to provide one of the more literally gut-wrenching moments of being unable to share communion. One of my friends who had not been to many Anglican liturgies asked me afterwards, “So… that was Anglican? But it was almost identical to [the Catholic] mass!”

About the only difference was the location of the sign of peace before the preface to the Eucharistic Prayer, a move which even our current pope has suggests we ought to emulate.

The whole point of being unable to share communion is that we are motivated by the pain of this that we work ever the harder for full unity. But if people are never in the position where they experience this, how can they be so motivated? A thought for a later post there… 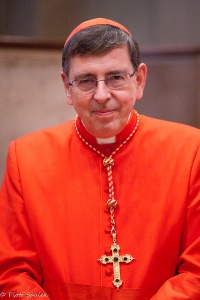 Finally, during the closing liturgy of the week, the papal vespers for the feast of the Conversion of St. Paul Outside the Walls, there was another interesting little thing. In addition to the ecumenical guests offering prayers and readings, which is quite standard, the Latin-chanted Lord’s Prayer included the doxology. There were actually audible responses from the seats around me along the lines of, “huh, that’s interesting!” – at least from the people who know enough Latin to have noticed. One of the choirs even stopped, perhaps out of habit, a line early and had to jump back in to finish the prayer. Reflecting on the addition, it occurred to me that while it could well have been an ecumenical gesture, it was also a more authentically accurate move from a purely Catholic liturgical point of view, as well. More on that below.

Oh, and i got to meet Cardinal Koch, Cardinal Kasper’s successor as President of the Pontifical Council for Promoting Christian Unity.

By A.J. Boyd in La vita Roma, Theology and Ecumenism on January 29, 2011.
← Almost Reverend Lord’s Prayer and Doxology: a suggestion →