Home » La vita Roma » The Dialogue of Life in Rome

The Dialogue of Life in Rome

A former student-resident of the Lay Centre returned this semester as a visiting professor at the Pontifical University Gregoriana (the Jesuit university down the road). Dr. Esra Göezler is a Turkish Muslim who had studied in Rome and returned to co-teach a course with Christian and Jewish scholars, and as a scholar-in-residence at the Lay Centre.

Near the end of the semester Esra sat in a panel presentation at the Lay Centre with a German Jesuit and an Italian Jewish reporter titled “Abrahamaic Religions in the Dialogue of Life in Rome” in which each participant shared their experience of living in the Eternal City in the daily life dialogue with the other Abrahamic faiths. The Lay Centre and PISAI – the Pontifical Institute for the Study of Arabic and Islam, another Jesuit faculty in the City – featured prominently in the discussion.

Over the next few days, Esra provided further opportunity for dialogue and encounter, as the Lay Centre hosted the (brand new) Turkish Ambassador to the Holy See, Professor Kenan Gürsoy and his wife for dinner on 25 May. The following evening Padre Miguel Ayuso-Guixot, director of PISAI presided at our final mass and community night of the academic year. We were honored by the presence and insights of all three distinguished guests by Esra’s initiative.

At around the same time we heard good news about our housemate, another extraordinary Muslim scholar, Rezart Beka of Albania. Rezart has been in Rome this year on scholarship from the Nostra Aetate Foundation, set up in 1990 by Pope John Paul II for non-Christians to study Christianity at the pontifical universities in Rome. Scholars usually stay for one semester, and Rezart was already granted an extension. Facing the possibility of losing him as a student next year as the scholarship came to an end, a donor has set up an entirely new scholarship for Muslims to study at PISAI and Rezart is the inaugural recipient! 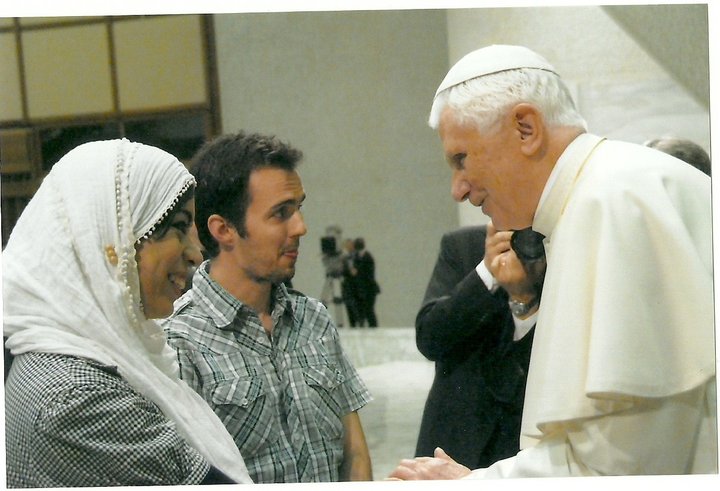 By A.J. Boyd in La vita Roma, Theology and Ecumenism on May 21, 2010.
← Russian National Orchestra in the Vatican Pentecost at the Pantheon →