The Ides of March

I remember being told by some middle school science teacher that each of us probably had two molecules of Caesar’s last breath in our biological makeup. Naturally, given my birth on the anniversary of his assassination, I have always had an interest – I do not think I would go so far as to say a connection – with the Roman Dictator.

I also cannot tell you how many times in my life I have heard the phrase uttered, “Beware the Ides of March” instead of the usual “Happy Birthday!”

With March being full of intensive courses, I was not able to get the full effect of Rome’s celebration honoring its first leader to be officially deified. The site of his funeral pyre, in the heart of the ancient Foro Romano, is modest by comparison to some of the temples around it, but is still adorned with fresh flowers almost daily by Roman devotees. Near the statue of Julius on the Via Forii Imperialli we witnessed a troop of costumed youth re-enacting the story of Caesar and his assassination in 44 B.C. 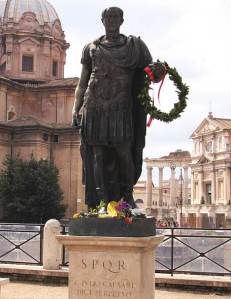 While the Roman Senate house is still visible on the Roman forum, it was not in this building where as many as 60 senators participated in his assassination. Instead, meetings were taking place across town, near the Area Sacra at Largo Argentina, in the Theatre of Pompey. There is a restaurant, I’m told, where you can access the basement and eat in part of what was the building in which Caesar was killed. I did not get around to making reservations this year, but maybe next!

Instead, we had a typically great meal at the Lay Centre, and thanks to the intervention of my favorite Dutch theologian-diplomat, Feda baked a delicious flourless chocolate cake popular in Italy known as Torta della Nonna (Grandmother’s Cake).