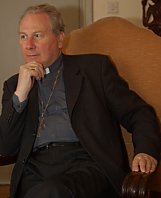 Papal Nuncio to Egypt and the Arab League since 2006, Archbishop Fitzgerald had succeeded Cardinal Francis Arinze as president of the Pontifical Council for Interreligious Dialogue in 2002 and has served as secretary of the same Council since 1987. A graduate student in Rome during the Second Vatican Council, he was a student of Bernard Lonergan and had the privilege of attending lectures by Council peritii Karl Rahner, Yves Congar, and others. A student of Arabic and Islam since those early days, he returned to Rome in 1971 as director of the Pontifical Institute for Arabic and Islamic Studies and as a consultor to the Council he would later lead. He was ordained a bishop by Pope John Paul II on the feast of the Epiphany, 1992.

He returned to Rome this week at the invitation of the Centro Pro Unione to deliver a lecture on the role of religious communities in Interreligious Dialogue. The evening before the lecture, he joined us at the Lay Centre to preside at our Eucharistic celebration, and offer a few thoughts about his ministry.