A dialogue of hospitality

We had a few guests for dinner at the Lay Centre tonight.

That would be the “necessary but insufficient” description. Allow me to elaborate.

Former U.S. Special Representative to the U.N. agencies in Rome (and former U.S. Representative), Ambassador Tony Hall, his wife Janet, their daughter Jyl and her husband Ryan joined us for dinner. Apparently during their years in Rome, Mrs. Hall was a regular participant of the Centre’s ongoing formation program, the Vincent Pallotti Institute, and she and Ambassador Hall became regular guests and friends of the Lay Centre.

Now back home in the States, they were in Rome for a few days and were able to stop by to see the new location and meet the new members of the community. Ambassador Hall shared with us some reflections on his dedication to eradicate hunger and malnutrition in our world, and gave witness to the fact that it was his faith in Christ, and the conviction of the Gospel, that moved him to spend so much of his life in service to those most in need.

Jyl and Ryan – who, as it turns out, is a native of Bellingham, WA –came across the Adriatic from Macedonia where they are involved in a ministry sponsored by Faith and Learning International. Between sports and art, they are reaching hundreds of youth in the context of a broader outreach in the Balkans. You can read their blog here: http://prayforryanandjyl.blogspot.com/ 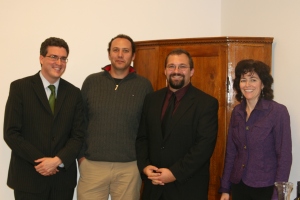 We were also honored to have Ms. Naomi Shank, director of the Russell Berrie Fellowship program, Mr. Daniel Roberts, director of the Institute for International Education’s Europe Office (IIE), and Dr. Adam Afterman of Hebrew University and the Shalom Hartman Institute in Jerusalem. As you know, my studies at the Angelicum are being funded by one of the Russell Berrie Fellowships, which is coordinated through the IIE, and a part of our fellowship is a seminar in the Holy Land coordinated by Dr. Afterman and the Hartman Institute, so it was a particularly welcome opportunity for me to put faces with the names of those responsible for my grant.

Finally, complete with Caribinieri escort, the newly appointed U.S. Special Representative to the U.N. agencies in Rome, Ambassador Ertharin Cousin, joined us just as Ambassador Hall was beginning his after dinner remarks. Having just arrived to her post the same day I arrived in Rome, not quite two weeks ago, that she was willing to find time to join us was indicative both to the Ambassadors own commitment to interfaith and inter-cultural dialogue and reconciliation, and to the value of the Lay Centre in the life of Rome as a place where the dialogues of life, charity, and hospitality coincide with the dialogue of truth. 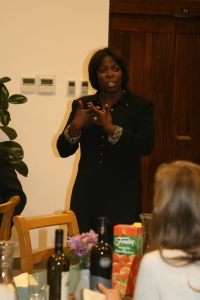