Week of Prayer for Christian Unity 2018

For years, I collected and collated the calendar for the celebrations during the Week of Prayer for Christian Unity here in Rome. Thankfully, Churches Together in Rome has taken up the task this year! Here are the events we know of; probably, there are others. Please let me know and I can add them.

16.30 An afternoon of prayer and reflection,
with an address by Mgr. Paul Mc Partlan, on
“Chieti and the Trajectory of Orthodox-Catholic Dialogue”,
followed by an Ecumenical Celebration of the Word:
Presider: Rev. Tony Currer (PCPCU); Preacher: Rev. Ruth Frampton (Salcombe England).
At Centro Pro Unione, via Santa Maria dell’Anima, 30, 1st Floor (Piazza Navona)

18.00 Evensong (Evening Prayer) with the Anglican community of All Saints
at the Papal Basilica of St. Paul’s Outside the Walls.
Presider: Rev. Jonathan Boardman

18.00 Evening Prayer with the Evangelical Lutheran community of Rome.
At St. Paul’s Outside the Walls. Presider: Rev Jens-Martin Kruse

18.00 Mass (Basilica Polyphonic Choir) at St Paul’s Without the Walls

18.00 Evening service at St. Paul’s Outside the Walls
led by the Methodist Community in Rome.
Presider: Rev. Dr. Tim Macquiban

18.30 Christian Unity Service, Diocese of Rome/Vicariate for the City
With Walk of Witness from Piazza di Spagna to S. Andrea della Fratte.

17.00 Papal Vespers at St. Paul’s Outside the Walls
(ticket only – apply through your local churches) 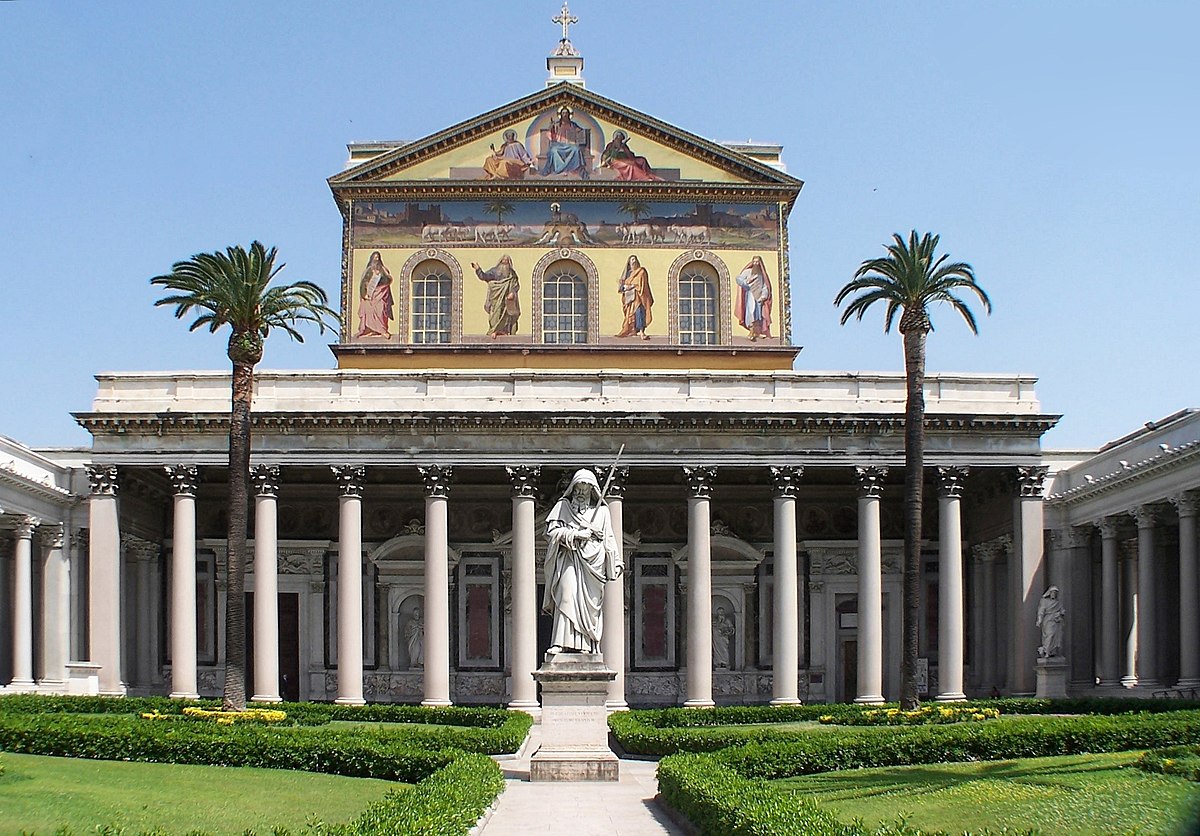 Papal Major Basilica of St. Paul’s Outside the Walls

Final Statement
Fundamentalist or Responsible Citizen?
The Contribution of Religious Communities to the Formation of European Citizens.
28 November to 5 December 2010 Sarajevo, Bosnia and Herzegovina.

Our God has called us here all together, Jews, Christians and Muslims, motivated to encourage young religious people to take a more active role in public life within Europe. In light of the changing religious composition of European societies, increased xenophobia, and a trend towards excluding religion from civil discourse, our aim was to propose ways in which young religious European citizens can take a more active role in fulfilling their duties towards society as a whole.

We are concerned over the rise of extremist attitudes, sometimes identified with fundamentalism, whether religious or secular. We believe that religions, cultures and civil systems can work together towards common  objectives.

We assert that religious identity should not be excluded from the public sphere, and that in order to achieve a fairer society, people of all backgrounds and beliefs must take an equal part in civil activities.

To achieve this, we recommend:

These are activities that will need to be continued by all members of European society on a long-term basis. We must persevere towards a more committed, more responsible and more inclusive society, all together.

For the last week, I have been blessed with the opportunity to be in Sarajevo with a great group of young people from all over Europe. We gathered for a conference entitled Fundamentalist or Responsible Citizen? The Contribution of Religious Communities to the Formation of European Citizens. The sponsoring agencies included the Ecumenical Youth Council in Europe (EYCE, affiliated with the WCC), the Forum of European Muslim Youth and Student Organizations (FEMYSO), and the Council of Europe. This summit marked the culmination of a three-year Campaign to Overcome Fundamentalism spearheaded by EYCE.

I should note that “youth” means something different here than in the U.S., as anyone involved in World Youth Day would be aware. At home, especially when speaking of “youth ministry”, we are talking of teens in middle school and high school, age 12-18 or so. Over here, “youth” means university age, in its broadest implications, so the participants ranged from 20 to 35. After almost a decade of involvement in National Workshops on Christian Unity and some NCC events in the States, it was striking to be one of the older people in the room rather than one of the youngest.

About 45 people were gathered, roughly twenty each were Christian or Muslim, and only four or five were Jewish. I think only four of us were Catholic, with Orthodox, Protestant and even pre-protestant communities represented (i.e., Moravians, Czech Brethren, and Waldensians). Most European states were represented, with the Iberian countries being the only noticeable absence. I was the only non-European, but for my European credentials I was ‘representing’ the Vatican as a pontifical university student – that is, quite unofficially.

The highlight of the week was the other participants. My roommate was a student from Lithuania. I spent time at a British pub called “Cheers” with a theologian-staffer to the Icelandic bishops’ national office, a protestant pastor’s kid from Northern Ireland living in the Republic, and a Romanian seminarian friend who lead the planning of the whole event (and just turned 22). One of my first conversations was with a Palestinian Briton about the situation in the Holy Land, and my experiences there with the Russell Berrie Fellowship. I shared shisha with a Turkish Muslim woman living in Cairo, and burek with two Albanians from Macedonia and a Latvian who has seen more of the world than I likely ever will! And the list goes on.

Despite having studied in Rome for the last year, this was the first time to really talk about Europe per se with Europeans – really to listen and observe as they discussed it themselves – especially on such a relevant issue as the role of religion and secularity in nation, state, and European society. (Most of my classmates are African, Asian, and some from the Americas and what Europeans there are mostly from the east, and a minority.)

While not an academic conference exactly, the presentations were on topic and promoted good discussion. We had a welcome from the Mufti of Sarajevo and President of the Interreligious Council (IRC), a panel with Muslim, Orthodox, and Catholic representatives of the Bosnian IRC, and presentations from Bashy Quarishy of Denmark, Hasan Patel and Imam Ajmal Masroor of the UK, and Dirk Thesenvitz of Germany. At the end of the week, a subcommittee of participants collated the week’s comments and discussion and drafted a Final Statement, which was signed by all the participants. As part of that committee, I wish we had had more time, as there were a few areas that we felt could have been better phrased, but considering the actual drafting was done in about three hours, by committee for approval by the whole, it seemed to come together rather well.

Genesis 18:1-8, Let me bring a little bread, that you may refresh yourselves.
Psalm 146, He who gives justice to the oppressed and gives food to the hungry.
Romans 14:17-19, Pursue what makes for peace and mutual edification.
Luke 24:41-48, Then he opened their minds to understand the scriptures.

Today, electronic communication has made us neighbors in one small and overloaded planet. As in the time of Luke, many peoples and communities have had to leave their homes, wandering and journeying to strange lands. People of the world’s great faiths have arrived bringing new beliefs and cultures to our communities.

The story in Genesis describes how Abraham receives God in opening his house and offering hospitality to strangers. The God of all creation also stands with the prisoner, the blind, the stranger. Our psalm is an offering of praise for God’s everlasting faithfulness and all that God has done for us.

The text from Romans reminds us that the kingdom of God comes about through justice and peace and joy in the Holy Spirit.

The resurrected Christ brings his disciples together, eats with them and they recognize him again. He reminds them of what the scriptures said about him and explains what they did not understand before. Thus, he frees them from their doubts and fears and sends them out to become witnesses of these things. In creating this space for encounter with him he enables them to receive his peace, that implies justice for the oppressed, care for the hungry and the mutual up-building as the gifts of the new world of the resurrection. Christians throughout history have found the risen Lord as they have served others and been served by others in faith, so we too can encounter Christ when we share our lives and our gifts.

God of love, You have shown us your hospitality in Christ. We acknowledge that through sharing our gifts with all, we meet you. Give us the grace that we may become one on our journey together and recognize you in one another. In welcoming the stranger in your name may we become witnesses to your hospitality and your justice. Amen.

To what extent is the country in which you live hospitable to the stranger?
How in your own neighborhood can the stranger find hospitality and a space to live?
How might you show gratitude for those who have shown you hospitality by being available?
How does the cross show us that God’s hospitality is a hospitality lived out in total self-giving?

From the official material prepared by the World Council of Churches and the Pontifical Council for Poromoting Christian Unity:

Sharing our stories is a powerful way in which we give witness to our faith in God. Listening to one another with respect and consideration allows us to encounter God in the very person with whom we are sharing. The reading from Jeremiah offers us a powerful witness of God’s call to the prophet. He is to share what he has received, and so allow God’s Word to be heard and lived out. This call to proclaim God’s Word is also experienced by the disciples in the early Church, as witnessed to in the reading from Acts. Our psalm allows us to sing to God with a spirit of praise and thanksgiving.

Today’s gospel passage presents a Jesus who enlightens our blindness and dispels our disillusionment. He helps us to understand our stories within the one unfolding plan of God. During this Week of Prayer for Christian Unity, we listen to the faith stories of other Christians in order to encounter God in the variety of ways God’s very self is revealed to us. In listening with attentiveness we grow in faith and love. In spite of the diversity of our personal and collective witness, we find ourselves intertwined in the one story of God’s love for us revealed in Jesus Christ.

God of history, we thank you for all who have shared their story of faith with us and so have given witness to your presence in their lives. We praise you for the variety of our stories both as individuals and churches. In these stories we see the unfolding of the one story of Jesus Christ. We pray for the courage and the conviction to share our faith with those with whom we come into contact, and so allow the message of your Word to spread to all. Amen.

Are you “gossiping the Gospel” or just gossiping?
How open are you or your church to be drawn into the stories of others?
How open are you to share with others your stories of faith, and so give witness to God’s presence in your personal experiences of life and of death?
Are you aware of the enormous potential for good that modern means of communication offer the Church today?