After 35 Years: A Return to Reform?

My friends can tell you that I have a bad habit. Actually, more than one, but only this one is relevant at the moment. When going through my email inbox, I tend to scan everything, then work from the least important first ‘saving the best for last’, so to speak. Especially after a busy week, I might spend an hour just sorting through quasi-spam and quick reply messages, clearing the space so I can respond to the really important ones. The problem is that I too often run out of time, and messages from my closest friends or strongest ecumenical contacts languish a little too long awaiting attention. The same logic has log-jammed my blog lately.

Since about two weeks after Pope Francis was elected as bishop of Rome, I have sat down several times to start a reflection on his fledgling papacy. The problem is, every time I do this, I get distracted reading about whatever exciting new thing he has done. Often they are little changes, gestures and actions, but they paint a picture of humility and commitment to reform, openness to dialogue and noble simplicity of faith and its expression.

By now the litany of these little things is well known: He appears on the balcony dressed in the simple white simar, like John Paul I, rather than the mozetta and stole of JPII and BXVI. He asks for our blessing before offering his own. He makes personal phone calls. He demonstrates astute ecclesiological acumen by referring to himself as the bishop of Rome, and his predecessor as bishop emeritus of Rome, exclusively. He stops by to pay his hotel bill in person. He moves an entire liturgy out of St. Peter’s and into a juvenile prison. He washes the feet of women and Muslims. He calls the Patriarch of Constantinople ‘my brother Andrew’. He’s formed a representative committee of cardinals to reform the governance of the Catholic Church – or at least the Roman curia. He has unblocked the path to sainthood of one of the 20th century’s great martyrs, Oscar Romero. And so on…

A couple weeks after he was elected, one veteran vaticanist noted that “suddenly, everyone around here is laughing and smiling.” A senior colleague said “I had forgotten what it was like to be so encouraged and inspired.” A fellow student commented that it “felt as if a burden has been removed that I did not know I had been carrying my whole life [c.35 years]”

Although great joy truly has the reaction of the vast majority of people to Francis, not all have been positive. It took the traditionalist fringe all the way until Holy Thursday (15 days after election) to retreat into the old safeholds of disrespect and antagonism. First, they blame the press for creating a false Francis vs. Benedict comparison, and leap on every fan’s expression of praise for Francis as though it were an insult to Benedict.  Some immediately decried his humility as false, a kind of stage prop, and held up as a paragon of true humility the faithful master of ceremonies of Benedict XVI, novus Marini, for ‘suffering’ the loss of his lace. They have accused him of being a slob, of undermining the office of the papacy. Basically, they are afraid of change, hurt that the first pope since Pius XII to actually like all the neo-baroque nonsense resigned, and afraid of a return to the days when people were excited about the changes that Vatican II promised. [e.g.]

Everyone else had just long since forgotten what it was like to feel excited about the prospect of change in the church.

Earlier this month a Jesuit friend told me how his confreres have noted that the ‘young people’ do not seem to like Francis very much. The problem, though, here in Rome, is that ‘young people’ are judged as is everything else: clerically. The seminarians under 40, the same ones who were drawn to the priesthood as a power structure, certainly are nervous. But everyone else is giddy. The young, the old, the long-suffering and the fair-weather, everyone is happy but for those who invested in birettas and lace surplices (cf. John Allen, Jr.). But even for them, there remains a place in the Church. How could there not? No one is threatening their particular peculiarities and liturgical peccadilloes. But they simply are no longer being championed as the next big thing.

Yesterday, Pope Francis’ comments to the Conference of Latin American Religious were leaked, in which he seems to suggest not taking the CDF investigation of Religious too seriously, bemoans his own lack of administrative organization, acknowledges the problem of a “gay lobby” in the Vatican, and identifies as two of the most significant concerns today the Pelagianism of restorationist/traditionalist movements, and the Gnosticism of certain spiritualist movements.

One is the Pelagian current that there is in the Church at this moment. There are some restorationist groups. I know some, it fell upon me to receive them in Buenos Aires. And one feels as if one goes back 60 years! Before the Council… One feels in 1940…” The Pope is then said to have illustrated this with a joke: “when I was elected, I received a letter from one of these groups, and they said: “Your Holiness, we offer you this spiritual treasure: 3,525 rosaries.” Why don’t they say, ‘we pray for you, we ask…’, but this thing of counting…

(Though, it strikes me now, what will this mean for all the plenary indulgences I have been able to accrue while living in Rome? I have been saving them up for a rainy day, and now the numbers do not matter? Sheesh…)

Yet, lest you fear (or cheer) His Holiness’ critique of the extreme fringe as a radical departure from his predecessor, Andrea Tornielli reminded us of this commentary on the same topic from then-Cardinal Ratzinger:

…the other face of the same vice is the Pelagianism of the pious. They do not want forgiveness and in general they do not want any real gift from God either. They just want to be in order. They don’t want hope they just want security. Their aim is to gain the right to salvation through a strict practice of religious exercises, through prayers and action. What they lack is humility which is essential in order to love; the humility to receive gifts not just because we deserve it or because of how we act…

The sense now, for most, is that people are hopeful, but hesitate to be too hopeful. More and more, people are reminded of John Paul I, Papa Luciani, who had the same simple, honest way with the Petrine ministry and the hope that he had instilled that the reforms of the Council would continue, only to have those hopes dashed after only 33 days. Three months after Francis’ election, I think some people are still afraid that their hopes will not have the chance to come to fruition. But hope it is. 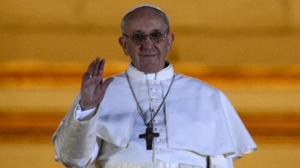 What do Catholic traditionalists and extreme feminists have in common?

Quote of the Day:

In every age there are people for whom history does not exist…Curiously, the Catholic restorationist who identifies the Gospel with certain vestments from the 1880s, with one biblical translation, or with a vessel from the fifth century or the fifteenth century has somewhat the same mind-set as the extreme feminist who rejects the past three millennia of cultures because their attitudes toward women in public life were limited. Both fixate on one time -whether that is in the past or today – and reject variety and progress. … The deepest enemy of every fundamentalism is history.

[Between the number of friends i count among both feminists and traditionalist Catholics, i trust everyone is equally piqued.]