An Israeli Arab and a Palestinian Jew walk into a bar…

(…if I had included this entry in the previous post as originally intended, the setup would have included a Russian nun.)

First, a disclaimer: I am an amateur in observing the processes for peace and justice in the Middle East. As an American I have an affinity for and support of Israel, as a Christian a sense of solidarity with many Palestinians, as a Catholic adamantly against anti-Semitism or any form of religious discrimination, and as an educator and practitioner of dialogue a commitment to non-violence and the truth. My limitations are such – neither speaking Hebrew nor Arabic, not being a native or a professional diplomat or peacemaker – that I have always known there were others who would understand the situation better. But I hope to learn more in these months. It sometimes, probably naively, seems like it would actually take little effort – it simply must be willed. The majority of people I meet could live with one another without problem, given the chance. I will offer further reflections on the current situation and overall concerns at a later time.

In the last week, I have tagged along with the sabbatical students of Tantur’s continuing education program – mostly priests, with a couple of religious – for a “dual-narrative” tour and conversations. I understand this set up was something of an experiment for Tantur, and I personally think it worked very well.

Two experienced guides, one Israeli, one Palestinian, traded off presentations designed to introduce participants into the overriding narratives in the region regarding the current situation. And, unsurprisingly, to suggest that it is black and white, and only two-sided, is erroneous.  Yet, many of us were only familiar with one or the other. (I have had an excellent introduction to Judaism and Israel, through the Shalom Hartmann Institute and the Russell Berrie Fellowship, but, while I have a good grasp of Islam generally, the specific Palestinian story was less firm in my mind; others had the opposite experience).

The most impressive feature was probably the positive dynamic between our two guides, and their openness to learn from one another, even as we learned from them. AS much as was possible, we had them both together, though occasionally separately.

We started with a presentation on the history of Zionism and its various movements. Then a presentation on Palestinian nationalism, and the shift from Arab to pan-Islam identity. We drove from Jerusalem to Jaffa-Tel Aviv along Route One, getting an interwoven dialogue of the history of the Israeli War of Independence; the displacement of Palestinians (mostly Muslim) from Israel and of Jews from the Arab countries (in roughly equal numbers); the stories of villages destroyed and of those survived. We visited the old city of Jaffa, the first Jewish neighborhood outside the old city, Neve Tzedek, and ended at Rabin Square, visiting the site of the former Prime Minister’s 1995 assassination. 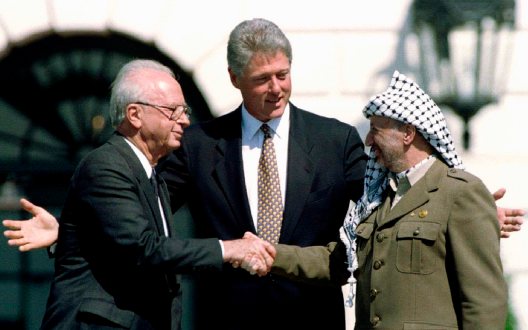 The iconic image of peace in the Middle East from my youth.

Oh, and we saw a couple gazelle along the road, too.

Our second day included a presentation by a couple of young workers involved in the Christian Peacemaker Teams based in Hebron, detailing their role as observers of the relationship between the Palestinian locals, Israeli settlers, the IDF and Border Patrol. Lunch at a famous restaurant above Shepherd’s Field, The Tent, was delicious and enlightening,conversation lead as it was by the regional director of the Alliance for Middle East Peace, a “network of organizations that conduct civil society work in conflict transformation, development, coexistence and cooperative activities…among Israelis, Palestinians, Arabs, and Jews.” In the afternoon we visited with a Christian Palestinian and an Israeli Jew, a former Seattleite turned settler, involved in an organization called Roots, which “draws Israelis and Palestinians who, despite living next to each other, are separated by walls of fear- not just fear of each other, but even of the price of peace.” We rounded out the day at the disputed Israeli development at Efrat, located in Judea/West Bank. A current population of about 10,000 is split into roughly 20% secular, 20% Haredi (“ultra-Orthodox”), and 60% Orthodox/Observant Jews, it was founded in 1983.

At the end of the day as we gathered for evening prayer, we found Tantur overrun by children. Turns out the seasonal gathering of Kids4Peace had been bumped out of their scheduled location and had had some trouble finding a place – some locations made some members uncomfortable, and unbelievably, some places did not want them. Who could object to kids wanting peace, getting to know each other? It was a beautiful benediction wrapping up a couple of intensive days, and a compelling reminder of what is at stake here in the land called holy.

While still processing much of the information and experience, i am a small step closer to understanding each of the narratives that often seem impossible to come from the same situation. And there are, as in every situation, exceptions and variations. It is also amazing how people living in such a small area,in such close proximity to one another can have so little contact with each other. This is one of the dangers of the current situation. As a couple people have noted, at least the older residents remember living side by side with someone who was “other”. Now, for the millennials, this sort of thing has never been part of their experience. How much easier is it, then, to establish increasingly divergent narratives?

During his Angelus address on Sunday, Pope Francis reiterated the papal battle cry of Paul VI, “War never again! Never again, war!” in response to the ongoing civil war in Syria, the regime’s use of chemical weapons, and the potential international intervention there. Referring to Syria as a martyred country – a country where the language of Jesus, Aramaic, is still spoken in some villages – the bishop of Rome urged in the strongest possible way the cessation of hostilities and the brokering of peace based on dialogue and negotiation.

He then proclaimed today, 7 September, a day of prayer and fasting for the entire Catholic Church, and invited Christians of other communions, members of other religions, and all people of good will to participate in whatever way they can. Here in Rome, we leave shortly to spend the evening in vigil at Piazza San Pietro. [The Icon Salus Populi Romani, pictured below, will be processed through the Piazza as part of the vigil this evening] 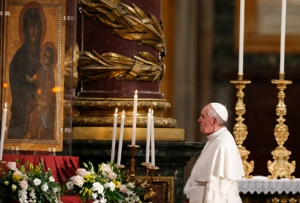 1) Would the secular media, who have been so far favorably impressed by this “pope who knows how to pope”, take up the cry and cover the Vigil for Peace in Syria? Or would they consign it to the littering of the editorial room floor, as they do with other pro-life initiatives of the Church (one thinks of the remarkable lack of coverage of the largest annual demonstration in D.C., for example), and

2) Would the other Churches respond? Has the genuine irenicism of the ecumenical movement of the last three generations grown to the point that we can put aside issues about whether the pope speaks for all Christians (or fear that by joining in a day of prayer and fasting would somehow acknowledge a real primacy of the Petrine office) long enough to do what is right, and to do it more convincingly by doing it as one Body of Christ?

The latter interests me more, as an ecumenist. Here is a list of ecumenical responses and endorsements to Pope Francis’ call (more added as I find them):

How Will You Pray for Peace on Saturday?

Resources from a friend…

Almighty eternal God, source of all compassion,
the promise of your mercy and saving help fills our hearts with hope.
Hear the cries of the people of Syria;
bring healing to those suffering from the violence,
and comfort to those mourning the dead.
Empower and encourage Syria’s neighbors
in their care and welcome for refugees.
Convert the hearts of those who have taken up arms,
and strengthen the resolve of those committed to peace.

O God of hope and Father of mercy,
your Holy Spirit inspires us to look beyond ourselves and our own needs.
Inspire leaders to choose peace over violence
and to seek reconciliation with enemies.
Inspire the Church around the world with compassion for the people of Syria,
and fill us with hope for a future of peace built on justice for…

Praying for Peace in Syria

VATICAN CITY — Whether you plan on following tomorrow’s Prayer for Peace vigil on TV, online or in person in St. Peter’s Square, a schedule of Saturday’s events will come in handy. As well as the official liturgical booklet.

Here is a breakdown of what will be happening and when: 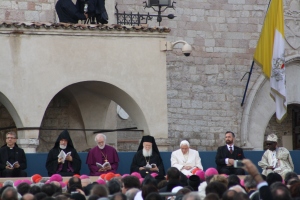 In all, there were representatives of the Orthodox Churches from the Patriarchates of Constantinople, Alexandria, Antioch, Moscow, Serbia, Romania, and the Ukrainian, Belarusian, Cypriot, Polish and Albanian churches. The Oriental Orthodox were represented by the Syrian Patriarchate of Antioch, the Armenian Apostolic Church (both Catholicossates) and the Malankara Orthodox Syrian Church. The Assyrian Church of the East was represented by the Metropolitan of India, the bishop of California and a priest.

The Anglican Communion, the Old Catholic Church, Lutheran World Federation, World Communion of Reformed Churches, the World Methodist Council, the Baptist World Alliance, World Convention of the Churches of Christ, the Mennonite World Conference, the World Evangelical Alliance, and the World Council of Churches were all represented, along with the Church of Scotland, the Disciples of Christ, the Salvation Army, and the classical Pentecostal churches.

Four “non-believers” were invited, a first, emphasizing Pope Benedict’s interest in the New Evanglization and his effort to engage secularism and religion on a level of common interest in the quest for truth. These included Julia Kristeva, Bulgarian-French psychoanalyst; Guillermo Hurtado, the Mexican philosopher; Walter Baier, a politician from Austria; and Remo Bodei an Italian professor of Aesthetic and philosophy. 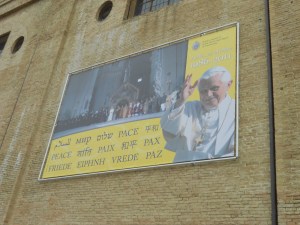