Pentecost at the Pantheon

One of the sights to see in Rome is Pentecost at the Pantheon. Since my Jubilee pilgrimage to Rome, they have set up pews and dressed up the altar to bring further attention to the fact that this most-famous of pagan temples is also (since the 6th century) a consecrated church. For the feast of Pentecost, at the end of the liturgy Rome’s fire department drops thousands of red rose petals from the oculus to the floor below, an image of the Spirit appear like tongues of flame around the apostles gathered in the Upper Room. To add to the effect, the sun was clearly cutting through the coouds of incense smoke, and a white bird chose just that moment to fly in and start flying circles around the falling flowers. (One person in the assembly gasped, “look, a dove!” which would have been fitting, but it was just a seagull…) 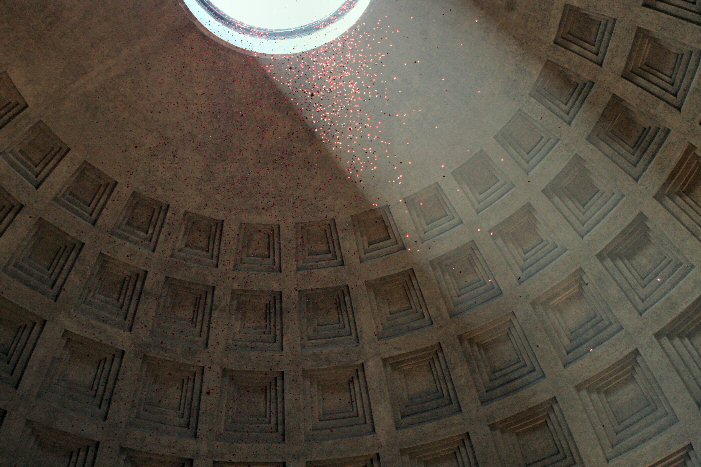 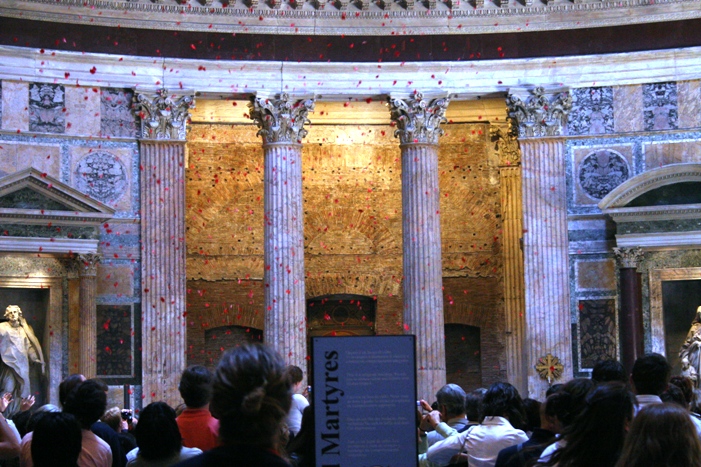 So much for a day of rest! After a couple of those, it was time to spend Sunday on passagata – walking around the major piazzas and sites at the heart of Rome. We started with the celebration of the Eucharist at the Oratory of St. Francis Xavier, on the Via del Caravita. The road is fairly short, but if you asked most Romans about the Oratory of St. Francis Xavier, they would have no idea what you were talking about. Tell them it’s the church “del Caravita” and then, everyone knows where it is.

[An oratory, by the way, is the name for a church which is semi-private in nature, similar to a chapel. It is the place of worship of a specific community, like a religious order, but can be opened for public worship at the discretion of the order.]

The oratory is staffed by priests from four different religious orders (Jesuits, Montfort Missionaries, Crosiers, Viatorians) and offered as “An International Catholic Community in Rome”. It is not a parish church, but serves as a community especially targeting sojourners, many o its members have spent their lives travelling internationally, and the typical Sunday Eucharist includes people from as many as 20 countries. The liturgy is in English, with a Spanish mass offered monthly.

I was introduced to del Caravita during the vespers service with Cardinal Kasper and Archbishop Rowan Williams in late November. (In fact, if you go to the Caravita website http://caravita.org/ and look at the pictures, you can see Stian and I sitting behind Archbishop Williams while he is preaching). After mass, we met the academic director of Notre Dame’s Rome program for the Architecture school, Steven Semes.

Then time for the touring! The Pantheon, Santa Maria Sopra Minerva, and Piazza Navona are not far, and it was a pleasure to introduce Nancy to these sites at the heart of Rome. There’s often a street performer of some kind at the Pantheon busking for tips, but this was the first time i had seen a whole flock of art students with their pads out sketching the place.

The Christmas bazaar at the Piazza Navona gives the place a different feel – its packed! We stopped in a the famous Tre Scalini on Piazza Navona for cappuccino and their Tartufo gelato – at €5, a treat I had been saving for a special occasion! After picnicking at the foot of Bernini’s Fountain of the Four Rivers, we decided to head back to the Lay Centre briefly, then were off again to All Saints for Lessons and Carols. From there we walked through the Spanish Steps and to Piazza del Popolo looking for the display of Nativity scenes, but to no avail (I found out later they were located above the Piazza, not in it).

A long day, and there’s still so much to see!