Today I fulfilled a childhood dream, and explored Narnia. Really.

There is something appropriate in the fact that i entered through a train platform, no less.

For years, taking the train up to Assisi or Florence, one of the stations you pass is Narni-Amelia, and inevitably one thinks of Narnia. But it looks like a small town with little to recommend it, so i have blithely passed on by, spending my rare travel days in more exotic locations. I have always chalked up the similarity to coincidence. Silly me. 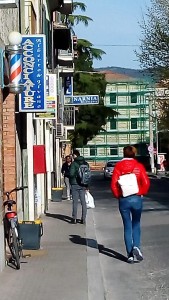 Narni is the Italianized name, of course, for a mid-sized town perched on a hill 800′ above sea level, and rising over the Nera river from which it probably got its original name. Settled by the Umbri – neighbors of the Etruscans – sometime before 600 B.C., the village was called Nequinum. As they were wont to do, the Romans showed up a few centuries later, and in about 300 B.C., it became a proper Roman municipality, and, as the original name sounded something like “unable/worthless” in Latin, the name was changed to, you guessed it, Narnia.

As you enter town, remains of an Augustan bridge still straddle some of the valley, built in 27 B.C.. Around the time that Jesus of Nazareth began his itinerant ministry in the Galilee, the future emperor Marcus Cocceius Nerva (96-98) was born here. Pliny the Younger (whose description of Vesuvius gave his name, ‘Plinian’, to that manner of volcanic eruption) recommends the baths here. Near the Ponte Cardona is a marker and a sign in several languages indicating that you are now at the geographic center of Italy.*

According to a 2002 biography of C.S. Lewis, by Lancelyn Green,

When Walter Hooper asked [C. S. Lewis] where he found the word ‘Narnia’, Lewis showed him Murray’s Small Classical Atlas, ed. G.B. Grundy (1904), which he acquired when he was reading the classics with Mr Kirkpatrick at Great Bookham [1914–1917]. On plate 8 of the Atlas is a map of ancient Italy. Lewis had underscored the name of a little town called Narnia, simply because he liked the sound of it.

There is no record of Lewis actually visiting Narni, but the name is not the only connection. There is also a Blessed Lucy of Narnia, a 16th century mystic, whose remains were restored to Narni at about the time that Lewis began to think up his Chronicles.I cannot help but think that the fact that a mystical creature is the city’s symbol and coat of arms couldn’t hurt, either. 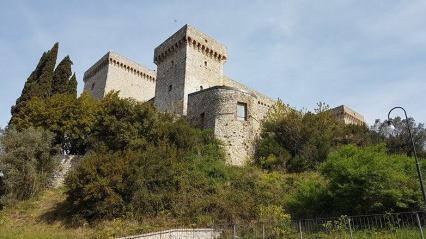 If you want to go both higher up and further in, two of the features of the town are the Rocca Albornoziana at the highest point, and the relatively recently rediscovered rooms of the Narni Sotterranea, excavated underneath the deconsecrated Church of San Domenico.

As one walks up through the city toward the 13th century castle – built to defend against Saracen invaders – one can imagine inspiration for Cair Paravel. In good shape, with a lot of modern construction to support a small museum, this is the site of some serious summer medieval fair experiences, it seems. Named for Cardinal Egidio Albornoz, apostolic vicar responsible for restoring the military influence of the Avignon popes in the Italian peninsula in the 1350’s and ’60’s.

On the other hand, the history of the underground reads more like Grossman’s The Magicians than Lewis’ Chronicles of Narnia. In the late seventies (more than a decade after Lewis’ death) a small band of young people from Narni had formed a kind of spelunking club, and discovered a small crack that lead into an underground chamber, which turned out to be the Church of Saint Michael the Archangel, a twelfth century chapel. Along with the chapel are a series of rooms that turn out to be cells and a torture chamber, used by the Inquisition for a period of about three centuries. Extensive graffiti in one of the cells left by prisoners from about 1745 to 1854. archives related to the activity of the tribunal based in Narni were part of the collection stolen by Napoleon Bonaparte from the Vatican and related to Paris; when the collection was possible to be returned, Vatican authorities at the time sought to preserve only a handful of the Inquisitions records (such as the trial of the Templars) and let the rest to be recycled. One box found its way to Trinity College, Dublin, including some from the Narni tribunal.

Certainly, worth the day trip from Rome!

View of Narni from Rocca Albornozania, complete with trebuchet and battering ram

*Apparently at least a couple other places also claim to be at the geographic center of Italy. The Italian Military Geographic Institute does not endorse any of them, as “”the (Italian) boot is not a geometric design and therefore it is impossible to determine the exact position of the centre of Italy”

On the way through the forum today… 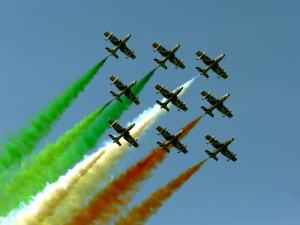 How well do you know your history? I suspected something was up yesterday when a single fighter jet kept making passes over the Foro Romano. Today confirmed it, as the Via Fori Imperialli was barricaded this morning as I walked to university for an exam. Just as I was getting to Trajan’s forum, Italian military jets do a low fly-over trailing smoke in the Italian national tricolore.

Still, there was little beyond that, and I moved on to my exam, after which I enjoyed a well earned siesta for the first time in weeks. After napping, I decided to try for a passagata and found my way to the Spanish steps to sit in the rays of the setting sun as I people-watched and pretended to study. Just as the sun dipped beneath the buildings, a military band marched up, cleared the first level of steps, and began a free concert that lasted for an hour.

The occasion? Surely you have guessed it by now. On this day in 1918, Italy defeated the Austro-Hungarian Empire in the battle of Vittorio Veneto, effectively ending World War I – a week later the armistice with Germany was signed. According to some commentators, just as the civil war was the last battle of the American revolution, some saw Vittorio Veneto/WWI as the last battle for Italian Risorgimento which had officially been completed with the 1870 conquest of papal Rome. 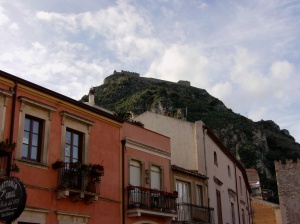 The rest of our stay was a sunny and warm 21°C (70°F). We got to explore the beaches and decided to hike from Letojanni to Taormina. Turns out there are no pedestrian friendly paths from one to the other, but we did find some cool ruins of unknown antiquity in some of the less accessible parts of the beach between the towns. (see below)

Taormina itself has been around since sometime around the 9th century BC, it seems. The Greeks built a theatre here in the third century BC, and the Romans expanded and improved it a couple hundred years later. It commands a magnificent view of the Mediterranean and Mount Etna – Europe’s largest active volcano, which looms above the town.

We enjoyed a Sicilian pizza with a view of the bay, and rode a cable car down to the beach, ate canola and sampled various pasticcherie for their dolci. The best was also found in Letojanni’s Piazza Durante at the Niny Bar, with a great ambiance. Unfortunately, the coffee did not compete with the less sophisticated place we tried before, just across the piazza, but the little pastries they make here are incredible.

While we got some good photos, i also found another travel blog with several really good ones:  http://www.galenfrysinger.com/taormina_sicily.htm 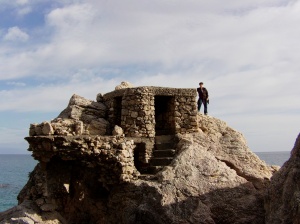 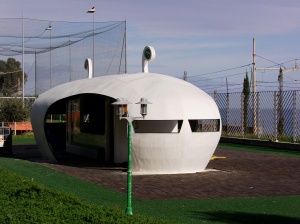 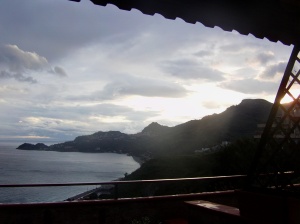 Letojanni is a summer resort town, and we were there in the off-season. On the first day, as we hiked down the hill from the resort to town in the rain (about 3km, and 500’ down) it reminded me of Ocean Shores or Leavenworth in the off-season. If you see it during the peak, you cannot get enough of the place, but if you come when nobody’s around you see everything there is to see in about half a day. Nancy’s main frustration was that even the places that were open for lunch apparently did not serve pizza on Sundays or until dinner. Mine was walking back to the resort. Uphill. In the rain. Wearing shorts. 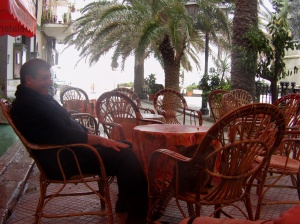 Thankfully, first impressions are not always accurate. It was Sunday, after all, so many places were closed and the locals were at home observing the Sabbath. And even in the winter, rain is not too common so all the locals were wisely waiting it out. We did stop for a caffé under the awnings of the rather tacky looking “Palm Beach Café”, right on Letojanni’s main square, Piazza Durante, faced by the Church of San Guiseppe. The caffé was excellent, and the server was a genial guy who shared about his trip to the U.S. and about how it was nice and quiet now, but in the summer it was crazy with foreign tourists – Japanese…  Americans… Italians…

When we did get back to the room, the view was worth the hike. 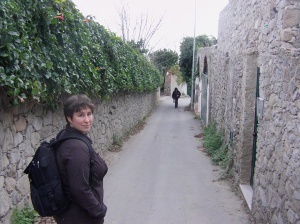 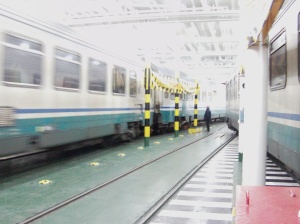 Trains. On a Boat.

It is a nine hour train ride from Rome to Taormina, about 750 km (466mi), and worth the extra 20 Euros for first class – which just means you get a semi-private cabin with up to passengers instead of open seating among sixty.

Before we left, a friend and classmate here told us that the way they got the train from the mainland to Sicily was by loading the passenger cars on a boat and then shipping us across! There’s only a mile and a half at the straits! If there’s a tunnel running 26 miles from England to France, surely they had a bridge or something for Italy to Sicily. Our skepticism melted when we got to the port of Villa San Giovanni, where, as predicted, they drove the train right onto a massive ferry and we set sail for the Sicilian port of Messina!

When we arrived at about 930pm, we discovered that the train station was actually 5 km drive up a winding road up a vertical climb of 700’ to the town of Taormina. But, we were actually staying a couple towns over, in Letojanni – 7 km away.

If you have not seen this yet, do take a few minutes.

Blatant ethnic cultural stereotyping? No doubt. But, according to the locals, it is all true: