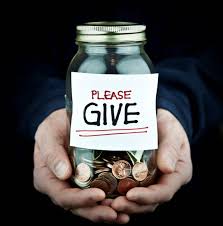 As my 40th birthday approaches, as for many people, it has become a time for reflection on what I have achieved and how I have lived my life so far.

One thing that has been on my mind has been this: As someone who committed to a life of serving the Church at the age of 17, and never really having worked outside the Church in my entire adult life, I accepted early that I would never become wealthy, and that never really bothered me. I figured as long as I devoted myself to ministry, at least my basic needs would be taken care of, and my only real material vices are books – and travel, especially the ability to visit friends and family on occasion.

I have been blessed with many opportunities and experiences. I have donated a wealth of time and talent to the Church and the community – but one regret, you might say, I have in choosing the life of a theologian and minister is that I have never had the means to be quite as financially generous as I would like. Particularly for those organizations from which I benefited in my formative years, or whose work I support and admire in my own modest way, I wanted to give a little back, with your help.

As I started to think about how to do this, Facebook started its fundraiser pages. While not quite as flexible as I dreamed, it certainly seems one of the easiest ways to go. My thought is simple – possibly naively so, but I hope in its simplicity there is broad appeal.

I am picking a dozen causes in a variety of areas that have played a role in my life at some point in the last forty years, either directly or indirectly, and which I would like to ‘give’ something more than my usual very modest amount.

$1000 to €1000 per cause seems like an entirely doable and meaningful, though still modest, amount. Too much for me alone (my entire rent and food budget!), but not too much when spread over a couple dozen – or more – of nearly 2000 Facebook friends, other colleagues, friends, acquaintances and strangers on the street.

Symbolically, I hope that people would consider a donation of 40 somethings in honor of my 40th birthday – whether Dollars or Euros or Pounds or Bitcoin is up to you, but I am thinking about what one might spend on a nice dinner out or a birthday gift for a friend as a model.

As for the causes, I will roll out one each month with specifics of both what program within each organization I am supporting, if applicable, and why it is important to me. My initial brainstorm gave me a few dozen possible causes, but I have narrowed it down, almost, to a dozen – one for each month of my 40th year. (Though, recommendations and reminders still welcome).

Facebook’s no “Father” fascism (and other woes of our age)

There is a new kind of fortnight for freedom on Facebook campaign. For the last couple of weeks one of the most pressing issues facing the church has not been, according to my newsfeed: the martyrs created by ISIS, the ongoing Russian invasion of Ukraine, the plight of immigrants and refugees, or the staggering disparity between multibillionaires and the billions in poverty. Rather, we must raise up arms about a new (or newly enforced) policy on Facebook that people ought to be using their real names. Petitions are being signed, editorials written, and, naturally, Facebook pages have been created.

The thing is, though, there are already two solutions in place. Here is a radical idea: Before starting a virtual religious freedom riot, why not see if you can get what you want by using the tools already at hand?

The first options is the Public Figure Page. This is intended for people with a following. Celebrities and theologians and whatnot. Here I use the well-known Father Robert Barron as an example. He has two facebook pages:

You can use titles for public figures, no problem. 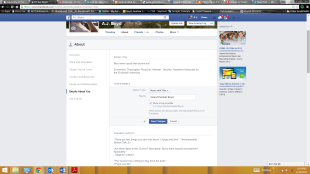 The second option is the “Name with Title” option.
(screenshot included)

Now, as a Catholic Christian, I have no problem with this “real names” rule. Online integrity is part of “though shalt not lie” as far as we are concerned. No need for aliases, pseudonyms, or the “anonymous” setting behind which we can sling mud. No, all trolling must be done in our own name, as our online presence is an extension of ourselves. Recent remarks by both Pope Francis and Pope Benedict XVI, usually on World Communications Day, have underscored this idea.

However, some in the flock are not satisfied that they cannot present their title or style of address as if it is part of their name. This has primarily been a concern of priests and seminarians, some deacons and sisters. It is apparently some kind of anti-Catholic conspiracy, despite the fact that the policy applies to rabbis and imams and wiccan priestesses and pretty much everybody else as well.

Some clergy have taken to creating neologisms for their names, as Father Ralph becomes FrRalph and Deacon Bob becomes DeaconBob. Others have changes their profile pictures in protest (samples inserted).

As a child of the digital age, a postmodern son of the Church (at least by generation), I am not inclined to agree. (And, as far as I can tell, Catholic doctors, judges, and professors have not expressed similar outrage.)

If I see your occupation is physician, I know it is polite to address you as “Doctor”; if you teach at university, I know your style is “Professor”; if I see you are a priest or deacon, I know that “Father” is a customary style of address, and will likely choose to address you that way.

It would be similarly pretentious, and inaccurate, to introduce yourself by saying “Hello, my name is Father Smith” or “My name is Doctor Jones”. NO: your name is Bob Smith or Tom Jones. Father, or Doctor, is not part of your name.

You could say, “Call me Father Smith” or “Call me Ishmael” if you want me to call you something other than just your name, but your name is your name. Be proud of it, and do not confuse it with your title. 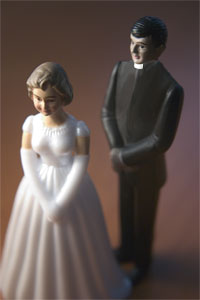 We have been friends for a while, possibly in real life, but certainly on this social networking site, which is far more important at the moment.

You are a priest of the Catholic Church. I am pretty good at ecclesiology, and having studied and discerned ordained and non-ordained ecclesial ministry my whole life, and I am quite sure that the norm of celibacy is still in force for the Latin Church. I have a deep respect and love of Eastern Catholic Churches, which generally allow their diocesan clergy to wed, but I happen to know that you are thoroughly Latin.

That being the case, unless you are an Anglican priest or Lutheran pastor who has come into full communion since your ordination, you are not married.

Yes, I know you are not alone, and it is not a clear cut choice. There is no “celibate” option on the relationship status list, last time I checked, so you and your brother presbyters have to choose between “single”, “in a relationship”, or “it’s complicated”, etc. Several of you have opted to present yourself as “married”, but I suggest this is not a good idea. Primarily because, well, you are not married.

You could say you are single, which is the most obvious true choice. The problem is that it might imply that you are available, and if you are chaste in your celibacy, as I am sure you are, then you are not available and I can understand that you do not want to give that impression.

You could say you are in a relationship, or that it is complicated, indicating you are not available, but neither are you engaged or married. These might be better, because, again, they are honest descriptions, though hopefully your commitment to your orders is not really that complicated. And it never says what kind of relationship you are in, so this could work.

But the one thing you are not is “married” (nor “engaged”, for you seminarians reading this). These very clearly indicate a vowed, committed lifelong relationship between two people that is a sign of love and union, and open to children. If you are religious you are in a vowed relationship as well, but it is not marriage. If you are diocesan (secular, for you old-school types), you are not even in vows, but an oath of fealty to your bishop.

Sure, back in the day when local churches elected their own bishops for life, it was spoken of as “being married to the church” – but when princes and popes took the power of placement away from the people, and when bishops began to move from see to shining see with impunity, the analogy began to break down.

And, sure, we can joke about people being “married to the job” because of their commitment and dedication, but these parallels and analogies are not the real thing. As Catholic Christians we view holy marriage as a sacrament – Pope John Paul II called it the “primordial sacrament” – and we should not treat it lightly.

For that reason too, as well as respecting the human person, it is probably not a good idea to refer to your breviary, your calendar, or your bishop even jokingly as your “wife”.

While we are on the topic of mixed messages – please do not wear a wedding band. You are not married.

Symbols are powerful. Consider if all the baptized and confirmed began wearing a stole as a symbol of their priesthood. Even though based on a true doctrinal reality – that by Christian Initiation all share in the priesthood of Christ – we reserve that particular symbol for a particular participation in His priesthood: that of the ordained bishop, presbyter or deacon. Similarly, the wedding band is reserved for those who actually participate in the sacrament of marriage, not a parallel image, no matter how sincere the intent or worthy the service.

If you want to begin a petition for Facebook to offer a “celibate” or “vowed religious” or even “consecrated virgin” relationship status, I will “like” it. I hope you can post an honest descriptor on your page, showing to the socially networked world the sacrifice you have made “for the sake of the kingdom”.

Until that time, however, please help me in supporting the traditional definition of marriage… by removing it from your profile.

Sincerely,
your (unmarried) brother in Christ.