Twenty years ago today, in the morning hours, U.S.-trained military personnel of the El Salvadoran government assaulted the Jesuit residence at the University of Central America, in San Salvador, killing eight people – six Jesuit faculty and leadership of the university, the housekeeper, and her 16-year old daughter.

President Mauricio Fuñes announced earlier this month that the priests would receive the National Order of Jose Matías Delgado – the nation’s highest honor – in a national service of atonement today. It was not clear if Celina and Julia Elba would likewise be honored, though I certainly hope so. The U.S. Congress also passed a resolution honoring “these eight spiritual, courageous and generous priests, educators and laywomen” and encouraging commemorations of the anniversary. 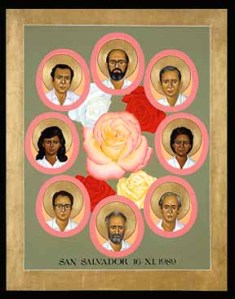 Julia Elba Ramos, 42,
cook and housekeeper for the Jesuit seminarians at the university

Segundo Montes, SJ, 56,
Dean of the department of social sciences

We must turn this sinful history upside down, and out of poverty
we must build a civilization in which all can have life and dignity.

(Thanks to Catholic Anarchy  for the icon and prayer!)