[Found in the archives of half-written posts, from shortly after the election of Pope Francis, the third anniversary of which we have just celebrated]

When your pastor retires, he is not called Father Emeritus John Smith.
Rather, Father John, Pastor emeritus of St. Whatshisname Parish.

When the pope retires, he ought not be called Pope Emeritus Benedict.
Rather, His Holiness, Pope Benedict, Bishop emeritus of Rome.

This seemed to be clear, we may recall, when suddenly it was not.
But then it was, at least to the new pope.

From such a good ecclesiologist as Ratzinger, the style Pope Emeritus always struck a discordant note. He knows better than most that there is no office of pope, and therefore no emeritus pope, only the office of bishop of Rome to which the style of “pope” adheres. (Like the priest who is styled “father”).

Turns out, it apparently was not his idea, and he would have been happy with “Father Benedict” (or Pope Benedict, since “pope” just means “father” anyway), as a style. This also recalls and reminds us of the practice that all clergy – bishop, deacon, presbyter – can be addressed as “Father”, not only the presbyterate.

That would have made a lot more sense: Father Benedict, Bishop emeritus of Rome. 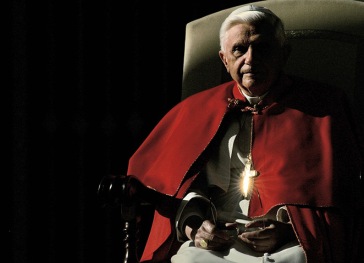 I originally posted this a couple of years ago on a different blog. I came accross it recently, and given where i am now (that is, Rome), it still seems funny, and i hope you can appreciate the humor. [Disclaimer: No clerics were harmed in the making of this post.]

At an ecumenical meeting not long ago, i found myself again trying to explain lay ecclesial ministry to a Lutheran pastor. While many non-Catholics (and even some Catholics) often think the only ministers in the Catholic Church are priests, at least this one had been ecumenically involved long enough to know different. He just was not sure how to address me.

“As a member of the Board,” he said, “you deserve to be addressed with appropriate formality in correspondence, and appropriate respect during meetings. So, what do we call you?”

I told him the name given me at my birth and baptism was Andrew, and that was fine – or A.J., as I have been known since birth: “No adornments necessary.”

Pressed, however, I shared how evangelical Christians i meet with invariably address me as “Pastor Boyd”, since anyone who does professional pastoral ministry is, ipso facto, a pastor, and therefore called “pastor”. I noted how, every time i got something from Hilel or the local synagogue, it was addressed to “Rev. Boyd”, because, again, the logic is, clergy are professional ministers, and I am a professional minister, so i must be clergy. Even when filling out legal forms, i often have to select “clergy” as my occupation, because for the uninitiated, clergy is defined by Webster, and not the Codex Iuris Canonicis, as “a group of church officials doing official church ministry”.

After all this, i was informed it just was not acceptable. We had to find something appropriate to my position as not-ordained but vocational, “professional” minister of the Church while respecting the internal distinction between clerical and lay ministers. So we began an exploration.

“Virtually Reverend”, “Not-Quite-Reverend”, and “Sort-of-Reverend” were all suggested before we alighted on “The Almost Reverend”.

After my colleague observed that a personal style was needed, too, I remembered a line from a great book and movie about a pope, Saving Grace,  and we decided the only possible ecclesiastical style for someone of such standing as myself was “Your Mediocreness…”

Therefore I can now fit in at the next clerical cocktail party as “His Mediocreness, The Almost Reverend A. J. Boyd”.