Guest response to ‘Liberal’ and ‘Conservative’ in the Church

My blog posts appear on my Facebook wall, and sometimes get comments there. A friend and former parishioner of mine, Colleen Walsh, shared this reply to my quote from Fr. Ladislas Orsy on ‘Liberal’ and ‘Conservative’ in the Church. I would like to see continued conversation on this idea, and will add some of my own thoughts soon, but I asked Colleen if she would allow me to repost her comments here on the blog so a broader audience could take up the theme, and she kindly agreed. [I have made some minor copy and formatting edits, but not edited content]

As always, replies, comments and critiques are welcome, but only respectful contributions will be approved! 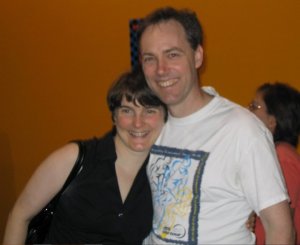 Colleen and her husband, Pat

A.J., I think there is actually a post-Vatican II split, some would call a schism of sorts, that is not being considered in this article.

I would have to ask this: If the people who like the Tridentine Mass would be considered the conservatives, and my group could be considered the faithful liberals, due to being post Vatican II, then what would you call the folks that seem to be more liberal than me? There are many examples of this, but I will only mention two for illustrative purposes. One example would be the people in the church that want women priests. Another group of people would be those who seem to actually embrace integrating eastern religious ideas and rituals into the Catholic church. I have had contact with many people of both these beliefs, neither of which, I would wish to be grouped with, if a line is being drawn.

The latter of these groups baffle me. I mean, If Jesus is the real thing, and our church is the One True Church, then it appears that one who believes in the integration of Eastern religion is implying that God somehow goofed and left something out when He started our church. How can that be if we are the One True Church? Last I checked, God doesn’t make mistakes. He picked males to lead his church from the beginning and He also chose His Son to be our saviour, who could bring us to His Father, God. God didn’t expect us to go through some guru to in order to have a relationship with God. If Jesus is the way and no one can come to His Father but by Him, then why do these people feel all paths lead to God? God is a loving God, so why would He ask His only begotten Son to die for us, a horrible painful death, if there were going to be other paths to Him anyway? God would not do it if He thought there was another way. God, in His infinite wisdom, is way smarter than us, and knows the weight of our sin, and it is very, very, heavy! Just look at abortion, for example.

Many folks think I am conservative because I like taking communion on the tongue and am glad that they put kneelers back the churches around here. I am opposed to the idea of inclusive language, don’t agree with the idea of women priests and am against using female altar servers. (I think female altar servers helped contribute to our dwindling number of vocations to the priesthood) I also really like that Mother Angelica and Fr. Corapi and Priests for Life are not afraid to stand up for the sanctity of life in this culture of death. I believe nuns should be happy to wear the habit, and should not be hiding their light under the bushel basket of street clothing. They shouldn’t be afraid to show their Catholic identity! I also do not like round churches as I believe we should be focused on the miracle of the Mass, the Eucharist, not the people across the room from us. That is a distraction. I believe the tabernacle belongs behind the alter, not in a separate room adjacent to the sanctuary like it’s some sort of a side show in a circus. The Eucharist is central to our faith and should not be kicked to the side of the building somewhere. I think a crucifix belongs inside the sanctuary at all times, not these statues of the risen Christ, because as Catholics, not only is it part of our identity, but it is an important reminder that we should see often. (Jesus loves us THIS MUCH, and suffered for us THIS MUCH) We are only human and need that reminder! The devil wants us to forget this. Seeing Jesus crucified helps to form a good sense of Catholic guilt. Contrary to popular belief, Catholic guilt can be a good thing. 🙂 It should be an integrated part of every conscience. It helps us to make the right choice. It helps us make a good examination of conscience. I think the risen Christ status are beautiful and would be a fine, even welcome addition, to today’s church, as long as they are not being used to replace the crucifix. They could be set up at the end of the stations of the cross to finish the story. 🙂 As for stained glass windows, I think it is a shame my first parish, sold their beautiful building in the 80’s to build a new round, visually plain, modernized church without kneelers. The old building had previously been a seminary and the stained glass and mosaics told stories of Saints and the Bible along with a beautiful stations of the cross. This beauty, along with the presence of the Eucharist in the tabernacle behind the altar, and the crucifix in front of the congregation which was a constant reminder of the ultimate sacrifice, created a beautiful setting for Mass, even with the folky guitar music I so enjoyed at the time. It was the perfect mix of old and new, in my opinion.

On the other hand, I have friends who think I am way too liberal because I do not want to go backwards to a complete Latin Mass. I think it’s important to hear the Word and understand it in ones own native language. (on a side note, I have to say, I dislike the bilingual masses our archdiocese is into doing. It seems there is always something lost for those who don’t speak both languages fluently, since they flip flop between the readings and songs. The only REAL bilingual part is the fact that the homily is said in both languages.) I attended a Latin Easter Vigil Mass once and although we could read along in English with every reading, the only part in a English was the homily. Even though the music was pretty, I wanted to sing along and was frustrated that it was mostly only the schola choir allowed to sing during the Mass. I think the part that got me most is that I felt a need to go back home and read the readings all over again in English because I still felt hungry for the Word! I have heard that I picked an extreme Mass to go to for my first Latin Mass, and that it was not typical to do every reading in Latin during many Masses, but I felt it really was not my worship style.

I very much enjoy Lifeteen Mass music, and am not opposed to clapping during songs in Mass. I have even sung with some of the “modern” music groups at different parishes and was even part of a Catholic handbell choir at a local parish before I moved up north. I listen to the local a Christian music station, and I even let my kids watch some secular TV shows, which would be considered taboo for some of my Tridentine friends, many of which don’t believe in even having a TV in the house at all. I am not opposed to holding hands during the “Our Father” and have been known to cross aisles and even give hugs during the sign of peace. Although, I try to wear my Sunday best, but I have to confess that on some occasions I find myself having to wear jeans to Mass. When this happens, I try to at least wear ones that are not too faded and can be sort of dressed up with a nice shirt and some shoes other than tennis shoes, after all it IS the King we are going to see! (Bishop Eusebio reminded me of that when he was our pastor at St. Elizabeth prior to becoming a bishop. It was kinda funny cuz I was so pregnant my feet wouldn’t fit my dress shoes, so I wore my fake birkenstocks the next week so as not to get reprimanded by Father. LOL) My Tridentine friends are almost never seen without a skirt, even on the playground and would never go to Mass without a veil. I do have to say that I am appalled at the fact that so many altar servers in our diocese that wear jeans and tennis shoes under their albs. I think it is not only tacky and distracting, but disrespectful to serve like this. Waiters at restaurant dress nicer than most of these boys!

I have been to charismatic gatherings over the years and have been baptized in the Holy Spirit and very much see the need to reach out to our protestant brothers and sisters and those of other traditions, though I do not believe we should be hiding our Catholic identity by trying to look like protestant churches. I believe music is a great place to find some common ground, both biblically and culturally in our liturgy without losing our Catholic identity in today’s world.

Believe it or not, there is a very large group that is often stereotyped as ultra-conservative, pre-Vatican II, but to the contrary, actually embraces the liberating aspect of hearing God’s Word spoken in a way that is meaningful to them in their own language. It is a group that appreciates the ability to sing praise to God with all the zeal given to us by the Holy Spirit, even, if it means clapping, and using guitars and drums! Yes, there is actually quite a large group of us conservative, yet modern (or as this article seems to call us, ‘faithful liberals’) post -Vatican II folks who are out there. We enjoy the ability to participate in Mass with a more modern worship style. The problem is that some people would like to throw us all into one category with the pre-Vatican II crowd just because we appreciate some of the beauty the old church had to offer, some of the same beauty you get to experience every day while you are in Rome. While we embrace the changes in liturgy given to us by Vatican II, we cling to whatever beauty and traditions we still have in today’s church, sometimes due to a deep understanding of the meaning behind the tradition and other times due to fear that before too long, the Church will be purged of all that identifies Her: throwing the baby out with the bathwater in an attempt to make Her more inviting to non-believers. It would be a sad day if they renovated Rome, yanked out all the crucifixes and kneelers, stripped the buildings of all the stained glass and mosaics in the name of Vatican II.