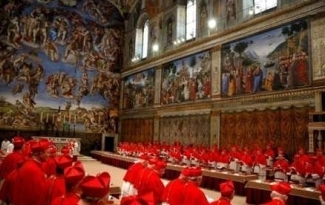 We are in the midst of an extraordinary Jubilee of Mercy, called at the end of the celebrations commemorating the 50th anniversary of the close of the Second Vatican Council, capping commemorations that started with the Year of Faith. For the last four years, the Church has marked this anniversary in a number of ways.

In October 2012, Pope Benedict presided over a solemn liturgy commemorating the opening of the Council, with Patriarch Bartholomew and Archbishop Rowan Williams in places of honor at his side. Also honored during the event 16 Council Fathers, any of the approximately 3000 bishops who participated in at least one of the four sessions of the Council. (At the time, there were several dozen still living).

They were joined by eight Eastern Catholic Patriarchs, 80 Cardinals, 191 Archbishops and Bishops participating in the XIII Ordinary General Assembly of the Synod of Bishops, together with 104 Presidents of Episcopal Conferences from throughout the world.

Today, a few months after celebrating the anniversary of the close of the Council, there are about 35 living Council Fathers; 19 of whom lived through all four sessions.

In this Jubilee of Mercy, i repeat a proposal i first made during the Year of Faith:
Make the remaining Council Fathers members of the College of Cardinals.
At the least, those who were Council Fathers for all four sessions.

The senior-most, Bishop Jan van Cauwelaert, CICM, of Inongo, Congo has been a bishop for more than 62 years. The junior of those present throughout the Council is Seattle’s Archbishop emeritus Raymond Hunthausen, ordained bishop mere weeks before the opening of the first session. (Full disclosure: Hunthausen confirmed me)

Of the 35, four are already cardinals, Francis Arinze, Jose de Jesus Pimiento Rodriguez, Serafim Fernandes de Arujo, and Sfeir (of those, only Arinze was not at all four sessions of the Council).

So, that means 15 new cardinals, if only those from all four sessions, or 31 if all of them.

All are over 80, so none would be voting. This is not about who selects the next pope or appointing people whose work lies in the future.

This would be an honorary step, something to mark a half-century of episcopal ministry and leadership in the rarest and most solemn exercise of their ministry of governance over the universal church. This is about honoring the Council, and the entire church. A small, but symbolic gesture.

Most likely, most would not be able to attend a consistory to receive the red hat and ring, but simpler may be better.

I think it would be a nice way to close out the Year of Mercy, a final way to mark the 50 years of blessing brought by the Holy Spirit through the universal and extraordinary magisterium of the Church, expressly in a spirit of synodality.

Granted: any credibly accused of sexual abuse of children, covering up the same, or other similarly grave matters should be excluded.

Full list of those surviving Council Fathers from all four sessions, via:

By A.J. Boyd in Church and World, La vita Roma, Theology and Ecumenism on May 15, 2016.
← Women Deacons in the Catholic Church: Quick Facts and Thoughts Calls to revoke the “Doctrine of Discovery” →