New image of the newly Blessed

This morning I have already begun to hear stories of people’s experience here in Rome for the beatification, from one being interviewed by CNN in the middle of Piazza San Pietro, to others who gave up trying to get within a kilometer of the Vatican, and still others who deliberately skipped town to avoid the chaos and the crowd.

The Beatification Mass began at 10:00am Sunday, with an hour-long rosary and divine mercy chaplet planed ahead of time.

Vatican security had cleared the Piazza at 7:00pm Saturday night, though people had already staked places and laid out sleeping pads on the cobblestones around the square. They were moved back beyond a large perimeter. We saw nearly every law enforcement agency available in the city – Policia Municipale, Guarda di Finanza, Carabinieri, Corpo Forestale, Polizia di Stato, et al.

One friend was at the perimeter by 1:00am Sunday, and she made it no closer to the altar than the obelisk in the centre of the piazza. Others arrived at 4:00am and were never able to get into the square. The gates officially opened at 5:30am, allowing people into Piazza San Pietro and Via della Conciliazione. By 6:15am, people were packed up to Castel Sant’Angelo. We followed a group of bishops into the crowd, only to be turned back on the close side of the castle – even the bishops could not get through.

Even in lateral directions the area around the Vatican was packed – I have not yet seen an aerial photo that was able to capture the whole scene of people-packed streets, I do not know if any of the helicopters were high enough to get that wide a view. 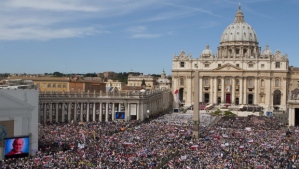 The 5.7 acres of Piazza San Pietro hold only a fraction of the people who came to Rome for the beatification

Some people decided to bail, and go somewhere they could be less crowded and watch it on a jumbotron – the city had a dozen such locations set up, including the Cathedral of San Giovanni in Laterano and the Circo Massimo. Others continued to push in, but never made it close. We found shade and refreshment under the umbrellas of a café’s outdoor seating area, with an oblique view of a jumbotron at Piazza Risorgimento, with no audio but a pilgrims radio tuned to a station translating the whole thing into Polish.

We spent almost two hours in a line to get a cappuccino and cornetto, and then go to the bathroom, once it was decided there was no where better to go unless we wanted to bail and watch at one of the other centers around the city. We got out just in time for mass to start, and stood (thankfully in the shade with tables to put our things on), for the entire 3 hour liturgy and angelus address. Even the English reading was translated into polish on the radio, so I could only relay the parts of the mass as I saw from the partial view of the screen and from the singing in Latin.

I am glad I was here for an historic event, grateful to be in a place with shade and with a friend, but sorry that, given the exhaustion of staying up all night after the vigil that we did not get closer than we did. But, I never thought I would get as close as we did, either. For his canonization, which I expect this time next year, I think the view from San Giovanni in Laterano sounds pretty good – especially for a pope who repeatedly said his role as bishop of Rome, along with Servant of the Servants of God, was the most important responsibility of the pope.

By A.J. Boyd in Church and World, La vita Roma on May 2, 2011.
← Christ is Risen, Alleluia! American Justice and Divine Mercy →